While a 'deep silence prevails' on the Red Planet, NASA rover Perseverance has captured several interesting noises during its explorations and a first analysis of acoustics based on recordings has found that the speed of sound is slower on Mars than on Earth. 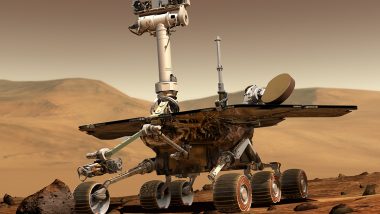 New York, April 2: While a 'deep silence prevails' on the Red Planet, NASA rover Perseverance has captured several interesting noises during its explorations and a first analysis of acoustics based on recordings has found that the speed of sound is slower on Mars than on Earth.

An international team of scientists reveals how fast sound travels through the extremely thin, mostly carbon dioxide atmosphere, how Mars might sound to human ears, and how scientists can use audio recordings to probe subtle air-pressure changes on another world -- and to gauge the health of the rover.

People can hear the "puff, whir, zap" of the rover's tools, the rover's mechanical whine and click in a light Martian wind; the whir of rotors on Ingenuity, the Mars helicopter and the crackling strike of a rock-zapping laser. "It's a new sense of investigation we've never used before on Mars," said Sylvestre Maurice, an astrophysicist at the University of Toulouse in France and lead author of the study.

"I expect many discoveries to come, using the atmosphere as a source of sound and the medium of propagation." Most of the sounds in the study, published in the journal Nature, were recorded using the microphone on Perseverance's SuperCam, mounted on the head of the rover's mast.

The variable sound speeds on the Red Planet are an effect of the thin, cold, carbon dioxide atmosphere, according to NASA. Another effect of this thin atmosphere is that sounds carry only a short distance, and higher-pitched tones carry hardly at all.

On Earth, sound might drop off after about 213 feet (65 metres); on Mars, it falters at just 26 feet (8 metres), with high-pitched sounds being lost completely at that distance.

The recordings also reveal previously unobserved pressure variations produced by turbulence in the Martian atmosphere as its energy changes at tiny scales. Martian wind gusts at very short timescales also were measured for the first time.

One of the most striking features of the sound recordings, Maurice said, is the silence that seems to prevail on Mars. "At some point, we thought the microphone was broken, it was so quiet," he added.

That, too, is a consequence of Mars having such a thin atmosphere. A key objective for Perseverance's mission on Mars is astrobiology, including the search for signs of ancient microbial life.

The rover is the first mission to collect and cache Martian rock and regolith (broken rock and dust). Subsequent NASA missions, in cooperation with ESA (European Space Agency), would send spacecraft to Mars to collect these sealed samples from the surface and return them to Earth for in-depth analysis.

(The above story first appeared on LatestLY on Apr 02, 2022 03:43 PM IST. For more news and updates on politics, world, sports, entertainment and lifestyle, log on to our website latestly.com).