Twitter's New Feature To Accept Bitcoin Payments As Tip on Its Platform: Report

Dorsey has also hired Bitcoin developers for his payments company. He is an advocate of digital currency bitcoin but he also says it is "not functional as a currency". 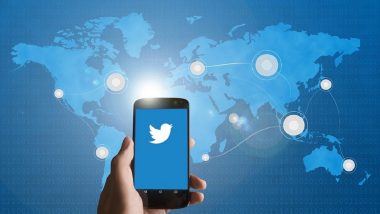 New Delhi, Jan 14: Twitter is considering a feature that would allow users to tip one another - in Bitcoins though. The Information reports that the micro-blogging platform is working on implementing a new payment feature to let people send money to each other. It is not yet clear whether the Twitter tipping feature would integrate with Jack Dorsey's other company, Square, which is a financial services, merchant services aggregator, and mobile payment company based in San Francisco. 'WhatsApp from Facebook' Rolling Out To New Users This Year; Confirms Facebook CEO Mark Zuckerberg.

Dorsey has made absolutely no secret of his love of Bitcoin over the years. NewsBTC has reported on the Twitter CEO opining that Bitcoin will one day be the currency of the internet and his company Square integrating cryptocurrency payments.

"Dorsey has been a major investor in the Bitcoin micropayments solution Lightning Network," said the report. Dorsey will move to Africa for three-six months this year to "define the future".

"Sad to be leaving the continent for now. Africa will define the future (especially the bitcoin one!). Not sure where yet, but I'll be living here for 3-6 months mid-2020. Grateful I was able to experience a small part," said the Twitter CEO.

Dorsey has also hired Bitcoin developers for his payments company. He is an advocate of digital currency bitcoin but he also says it is "not functional as a currency".

(The above story first appeared on LatestLY on Jan 14, 2020 07:05 PM IST. For more news and updates on politics, world, sports, entertainment and lifestyle, log on to our website latestly.com).