Boris Johnson, in Self-Isolation After Testing Positive for Coronavirus, Hails 'All Those Staying at Home' 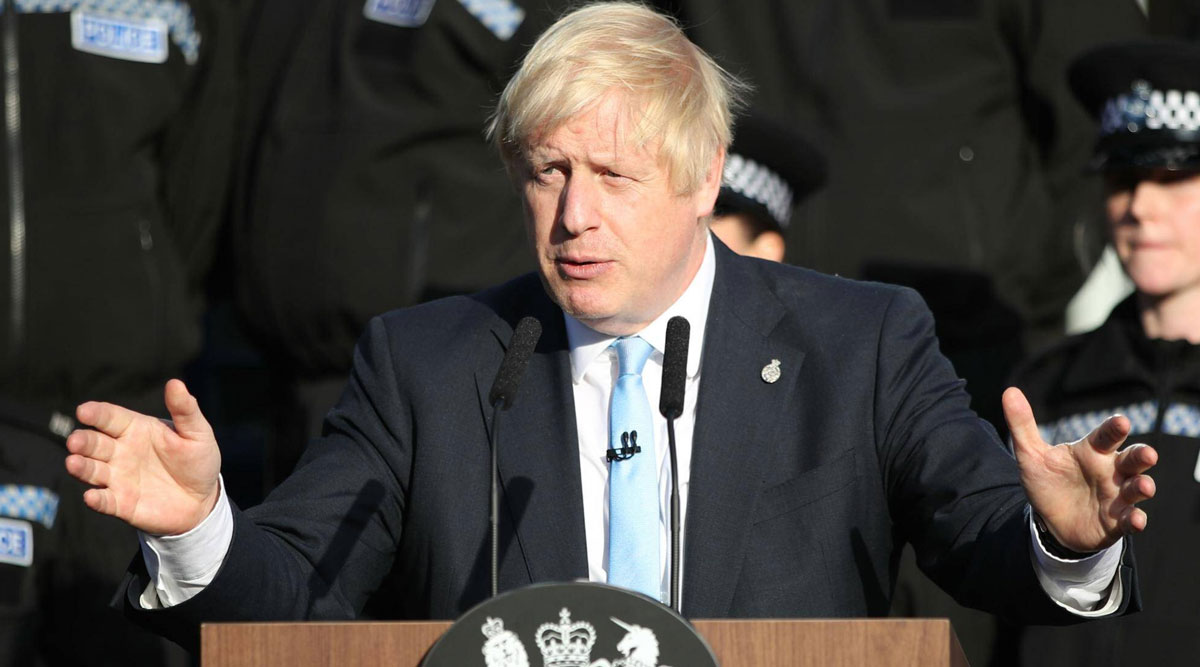 London, March 30: British Prime Minister Boris Johnson, who is self-isolating after testing positive for the coronavirus, took to social media once again to post a video message to update the public on his health, in which he also said that 20,000 former NHS staff have returned to help contain the deadly virus.

In a significant departure from the Conservative Party roots and former prime minister Margaret Thatcher's infamous declaration that "there is no such thing as society" reflective of her strong non-interventionist approach, Johnson delivered a contradictory message as he exhorted the public to carry on following the strict social distancing norms to help collectively control the spread of the deadly virus. Boris Johnson Tests Positive For Coronavirus: PM Narendra Modi Stands in Solidarity with UK Prime Minister, Says 'You’re a Fighter'.

Thanks to everyone who has been staying at home.

By delaying the spread of the disease we can reduce the pressure on our NHS, and that's how we hope to save many thousands of lives.#StayHomeSaveLives pic.twitter.com/kxdqItMYSE

"We are going to do it, we are going to do it together. One thing I think the coronavirus crisis has already proved is that there really is such a thing as society," he said in a video posted on Twitter on Sunday evening. “Thanks to everyone who has been staying at home. By delaying the spread of the disease we can reduce the pressure on our NHS, and that's how we hope to save many thousands of lives,” he said.

Looking ill but dressed in a suit and ties, Johnson tried to project his usual optimistic message as he carries on leading the country's response to the pandemic via video conferencing and phone calls. He thanked the nearly 20,000 retired doctors and nurses who have returned to the National Health Service (NHS) to help with the fight against the coronavirus pandemic.

Johnson applauded the British public for obeying the restrictions set out by the government to slow the spread of the virus and help reduce the pressure on the health service, adding that train use was down 95 per cent and bus use down 75 per cent.

His message came as the UK's coronavirus death toll continues to mount, with a further 209 deaths in a day to hit a total of 1,228. The country remains under semi-lockdown with a central message to “stay at home”, except for key workers who do need to get to work at hospitals, shops and pharmacies – where they must follow the minimum two-metre social distancing norm.

Dr Jenny Harries, the Deputy Chief Medical Officer for England, has said that the strict social distancing rules in place at present would have to remain for between two and three months. She warned that it would be a further three months before all the present restrictions were lifted, and even then there were likely to be “bumps” as new clusters of cases were identified.

“We must not suddenly revert to our normal way of living. That would be quite dangerous. If we stop them [the restrictions] all of our efforts will have been

wasted and we could see a second peak,” she said. “So over time, probably the next six months, we will see where we are going. We need to keep that lid on and then gradually we will be able to hopefully adjust some of the social distance measures and gradually get us all back to normal,” she said.

Meanwhile, the UK government has said that it is ramping up testing of NHS frontline workers. Some experts believe that the UK is beginning to show some early signs of slowdown in some indicators for the coronavirus outbreak.

"If we look at the number of new hospital admissions per day for instance, that does appear to be slowing down a little bit now. It's not yet plateaued, so the numbers can be increasing each day, but the rate of increase has slowed," said Prof Neil Ferguson, from Imperial College London and one of the government's key advisers on the pandemic.