According to data from aviation tracker VariFlight, airports in the affected regions have cancelled hundreds of flights. Around 60 percent of flights to the two main airports in Xi'an and Lanzhou have been cancelled. 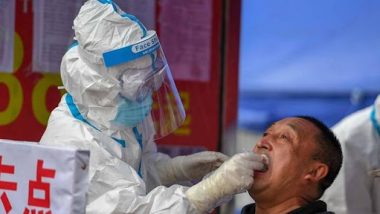 Beijing, October 21: China is grappling with another COVID-19 outbreak which is linked to a group of tourists, prompting authorities to shut down flight operations, schools and other public places. According to a report by AFP, the authorities in China have cancelled hundreds of flights to curb the spread of the virus. According to data from aviation tracker VariFlight, airports in the affected regions have cancelled hundreds of flights. Around 60 percent of flights to the two main airports in Xi'an and Lanzhou have been cancelled.

China has also ramped up mass testing on Thursday to get away with the new outbreak. The latest outbreak of the virus was linked to an elderly couple who were in a group of several tourists. The report informs that the couple started in Shanghai before flying to Xi'an, Gansu province and Inner Mongolia, adding that dozens of cases have since been linked to their travel. COVID-19 infections have been reported from their close contacts in at least five provinces and regions, including the capital Beijing, which has strictly shut its border and continues with targeted lockdowns. COVID-19 Vaccine Update: China’s Inhalable Ad5-nCoV Vaccine May Boost Antibodies Upto 300-Fold, Claims Report.

Precautionary measures have been announced in several parts of the country in the wake of the recent outbreak. Several regions in China including Lanzhou, a city of some four million people in the northwestern region, have told residents not to leave unless necessary. Also, the ones who need to leave, must present a negative COVID-19 test. China Agrees To Cooperate in WHO’s Fresh Probe To Trace COVID-19 Origin.

On Thursday, China's National Health Commission said that there were 13 new domestic cases reported in the country. To contain the spread of the virus, the local authorities in China have rolled out mass testing. Public places like scenic spots and tourist attractions, schools and entertainment venues in affected areas, and also imposed targeted lockdowns of housing compounds are shut for the general public.

(The above story first appeared on LatestLY on Oct 21, 2021 06:51 PM IST. For more news and updates on politics, world, sports, entertainment and lifestyle, log on to our website latestly.com).