The two flight recorders, or black boxes, of the China Eastern Airlines plane that crashed on March 21 are being decoded, an aviation official said on Thursday. 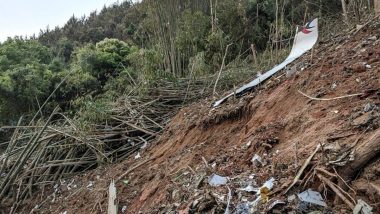 Beijing, March 31: The two flight recorders, or black boxes, of the China Eastern Airlines plane that crashed on March 21 are being decoded, an aviation official said on Thursday.

Preliminary analysis is being carried out after the site environment, debris distribution and impact marks have been located and photographed, Xinhua news agency quoted Zhu Tao from the Civil Aviation Administration of China, as saying to reporters.

Aviation experts are also studying and judging the possible trajectory, posture and impact force of the aircraft when hitting the ground, Zhu said. China Plane Crash: No Survivors Found in Crash of Chinese Eastern Airliner.

"By analyzing the data of air traffic control's radar automation system, we're trying to restore the real flight process before the crash," he said, adding that information on the flight's passengers, luggage, cargo and mail is also being examined.

The first black box of the Boeing 737 aircraft, believed to be the cockpit voice recorder, was recovered on March 23, while the second was found on March 26.

The China Eastern Airlines aircraft, which departed from Kunming, capital of southwest China's Yunnan province and was bound for Guangzhou, capital of Guangdong province, crashed into a mountainous area in Tengxian County.

All 132 people on board were killed.

(The above story first appeared on LatestLY on Mar 31, 2022 11:26 AM IST. For more news and updates on politics, world, sports, entertainment and lifestyle, log on to our website latestly.com).