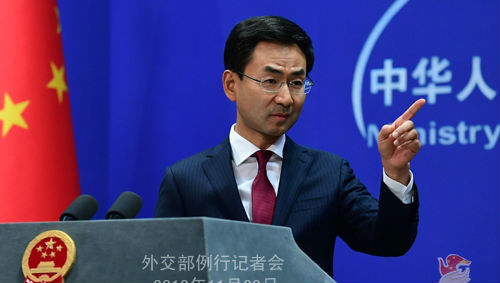 Beijing, April 29: China on Monday urged the US to respect China's sovereignty and stop interfering in Hong Kong's affairs. Chinese Foreign Ministry spokesperson Geng Shuang made the remarks in response to a statement by a US State Department spokesperson reportedly expressing "disappointment" over the decision by the Hong Kong Special Administrative Region (HKSAR) government to indict and imprison several organizers of the 2014 illegal "Occupy Central" movement. China Warns US of Scrapping Bilateral Trade Agreements.

The US spokesperson earlier said that Washington "will follow closely the proposed amendments to the HKSAR's Fugitive Offenders Ordinance". "China is strongly dissatisfied with and firmly opposes relevant remarks of the US Department of State spokesperson, which disregard the facts and laws," Geng told a press briefing.

He said the illegal "Occupy Central" movement inflicted severe damage on Hong Kong's rule of law, social order, economy and people's livelihood, according to Efe news. "Bringing criminal behaviour to justice according to law, as a due component of maintaining the rule of law, is widely supported by Hong Kong society.

"The amendments to laws including the Ordinance are necessary measures taken by Hong Kong to cooperate with other regions and countries in fugitives handover," Geng said, adding that the moves were also aimed at jointly cracking down on crimes and maintaining the rule of law, to prevent Hong Kong from becoming a "crime haven".

The Chinese official said that the US arbitrary comments and blame on Hong Kong's affairs were a "brutal interference" in the internal affairs of China and the HKSAR. China Warns US to Avoid Islands It Claims in South China Sea.

"We urge the US to respect China's sovereignty and the rule of law in Hong Kong, as well as the 'judicial independence' repeatedly professed by the US side and stop meddling in Hong Kong's affairs in any form," the spokesperson added.