The pilot of the US-Bangla plane that crashed in Nepal in March had cried and suffered an emotional breakdown during the flight, killing 51 people, according to a report by Nepal's investigators. 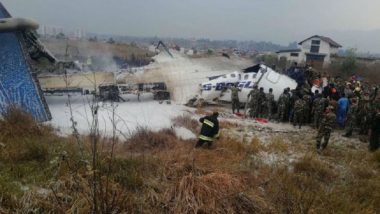 Kathmandu/Dhaka, Aug 27: The pilot of the US-Bangla plane that crashed in Nepal in March had cried and suffered an emotional breakdown during the flight, killing 51 people, according to a report by Nepal's investigators.

The Dhaka to Kathmandu US-Bangla Airlines flight, with 67 passengers and four crew members on board, caught fire after it careened off the runway and ploughed into a football ground near the Kathmandu's Tribhuvan International Airport on March 12.

Captain Abid Sultan was going through tremendous personal mental stress and anxiety, and a series of erroneous decisions on his part led to the crash of the flight, according to the details of the official investigation led by the Nepal government, the Kathmandu Post reported.

Throughout the flight, Sultan was engaged in erratic behaviour that marked a departure from his usual character-signs that should have immediately raised red flags, Nepali investigators concluded in the report.

Investigators say Sultan had been smoking cigarettes frequently during the hour-long flight from Dhaka to Kathmandu. "When we analysed the conversation on the Cockpit Voice Recorder, it was clear to us that the captain was harbouring severe mental stress. He also seemed to be fatigued and tired due to lack of sleep," investigators wrote in the report. "He was crying on several occasions," the report added.

The report also shows that Sultan made multiple abusive statements toward a female colleague (another co-pilot in the company) who had questioned his reputation as an instructor, and their relationship was a major topic of discussion throughout the flight, it said.

The voice recorder has captured nearly an hour-long conversation between the captain and his co-pilot in the cockpit, further demonstrating Sultan's tensed mood throughout the flight and a complete lack of situational awareness.

"I don't f---ing care about the safe flight, you f--- your duty," Sultan said at one point inside the cockpit, according to the report. It was not clear whom the pilot was directing the statement at, as the co-pilot was the only crew member present inside the cockpit during the flight.

Nepal's only international airport lies in a narrow bowl-shaped valley with the Himalayas to the north, making it a challenging place to land. As the flight UBG 211, a Bombardier Dash 8 Q400, approached the runway it made a last-minute change of direction, failed to sufficiently reduce its speed and did not carry out the necessary landing checks, investigators said.

Nepal has witnessed a number of accidents involving aircraft in recent years.

The accident was the deadliest since September 1992 when all 167 people aboard a Pakistan International Airlines (PIA) plane was killed when it crashed near the Kathmandu airport.