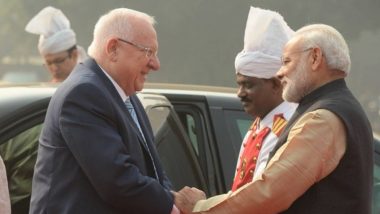 Happy #FriendshipDay to our dear friends in #India!

The Israeli embassy in New Delhi this year again hit upon a famous Bollywood number from Amitabh Bachchan-starrer Yaarana to convey their warmth towards the Indian people sharing a montage of joint meetings and collaborations between the two sides.

"Tere jaisa yaar kahan, kahan aisa yaarana (There is no friend like you, there is no friendship like ours)." "May our #Friendship & #GrowingPartnership strengthen even more in future!," a tweet from the official handle of the Israeli embassy said.

Last year, Israel had greeted India on friendship day with a Twitter message that featured the song ‘yeh dosti' from Bollywood blockbuster Sholay, sharing a montage on meetings between Modi and his Israeli counterpart, Benjamin Netanyahu.

The Israeli mission also called upon followers to "share a picture telling us what makes (this) friendship so special!".

Israel's Ambassador in New Delhi, Ron Malka, thanked India for being "such a great friend", emphasising that this growing partnership "is stronger than ever in times of a global pandemic".

He was referring to the ongoing cooperation going between the two countries in developing a rapid testing solution for COVID-19 that is expected to provide results within 30 seconds.