Imran Khan Switched Pakistan's Kashmir Policy From 'How to Capture Srinagar' to 'How to Save Muzaffarabad': Bilawal Bhutto Zardari

From a hawkish approach maintained by the erstwhile regimes, Islamabad has now resorted to a defensive approach, Bilawal alleged. 'Our Kashmir policy earlier was how to capture Srinagar, but now under Imran Khan because of his greed and failures our policy is how to save Muzaffarabad,' he said. 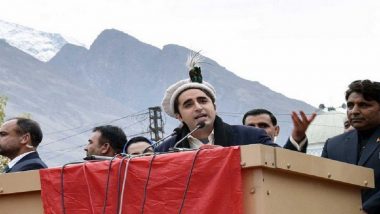 "Our Kashmir policy earlier was how to capture Srinagar, but now under Imran Khan because of his greed and failures our policy is how to save Muzaffarabad," said Bilawal, the chairman of Pakistan People's Party (PPP).

Muzaffarabad, the capital of Pakistan-occupied-Kashmir (PoK), has turned into a fresh flashpoint between New Delhi and Islamabad. India's Defence Minister Rajnath Singh has said that talks between the two nations would now be held only over PoK.

Jitender Singh, Minister of State in Indian Prime Minister's Office (PMO), said earlier this month that the government's resolve is to reintegrate the occupied portion of Kashmir with the rest of India.

Bhutto's tirade comes a day after Imran Khan, in his special address to the nation, vowed to "go to any extent" to liberate the people of Jammu & Kashmir.

The Pakistani government has been attempting to "internationalise" the Kashmir issue ever since the region's autonomy and special status was stripped by New Delhi. The move, which Islamabad termed as "unilateral", was implemented by the Indian government on August 5.

Khan on Monday said he would be raising the issue at the United Nations General Assembly, where is scheduled to speak on September 27. The Pakistan PM urged the global leaders to intervene, claiming that a war between India and Pakistan would be catastrophic as both nations are nuclear-armed.

(The above story first appeared on LatestLY on Aug 27, 2019 06:50 PM IST. For more news and updates on politics, world, sports, entertainment and lifestyle, log on to our website latestly.com).