The foremost conclusion from the UNSC decision, which analysts have derived, is the isolation of United States at the Security Council. The proposal of the US seeking extension of the arms embargo on Iran was supported by only one member state - Dominican Republic. Traditional allies decided to abstain from voting, which worked in favour of Tehran. 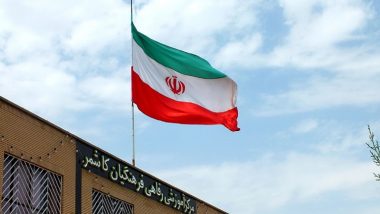 New York, October 18: The conventional arms embargo imposed on Iran, since 2007, ended on Saturday as the United Nations Security Council (UNSC) refused to extend the sanctions. The top UN body allowed the embargo to expire, despite the United States leading a campaign to seek its continuance. Trump Vows Any Attack by Iran to Be Met With '1000 Times Greater Magnitude'.

A resolution was moved before the 14-member UNSC by the US, seeking the extension of the arms embargo citing the danger which the "authoritarian regime" of Iran poses on regional stability in the Middle East. The resolution was profoundly defeated.

The foremost conclusion from the UNSC decision, which analysts have derived, is the isolation of United States at the Security Council. The proposal of the US seeking extension of the arms embargo on Iran was supported by only one member state - Dominican Republic.

Eight other members including the E3 - UK, Germany and France - abstained from voting, whereas, Russia and China voted against the US resolution. The apparent isolation of the US, with only one country backing its proposal, reflects the weakening geopolitical clout of America in a world that is increasingly turning multi-polar.

The end of arms embargo, apart from embarrassing the US which was desperate to seek its extension, has also emerged as a setback for its ally Israel. The Benjamin Netanyahu-led government, which is not represented at the Security Council, had appealed other member states to vote against Iran considering the risk it poses to Israel.

Middle East policy watchers claim that the concern of Israel, though expressed explicitly, is also tacitly shared by Saudi Arabia, the United Arab Emirates, Bahrain and other Gulf countries which have aligned with the US in their anti-Tehran approach.

Considering the historic rivalry between Iran and the Saudi Arabia, cautions have been raised over the lifting of arms embargo. While most countries of Europe have supported the end of sanctions against Tehran on defence sales and purchases as it is in accordance with the 2015 nuclear deal, concerns were marked over the threat to regional stability.

Foreign Ministers of the E3 nations - UK, Germany and France - had issued a statement in July to underline their belief that lifting of arms embargo would lead to regional tensions. "This would have major implications for regional security and stability," they said, despite adding that the sanctions are bound to be lifted in accordance to the Resolution 2231 which was inked in 2015 between Tehran and other signatories of the Joint Comprehensive Plan of Action (JCPOA) accord in 2015.

Russia, which voted against the US resolution at the UNSC, is expected to benefit most from the ending of arms embargo on Iran. According to a 2019 US Intelligence Agency report, Tehran is interested to procure the Su-30 fighters, Yak-130 trainers, T-90 tanks, Bastion mobile coastal defence missile systems, and the S-400 surface-to-air missile defence systems from Moscow.

The speculations were boosted by the visit of Iranian Defence Minister Brigadier General Amir Hatami to Russia in August this year.

The deepening bilateral ties between China and Iran, which was reflected by Beijing's decision to vote in favour of Tehran at the UNSC, is expected to expand in the defence sector as well with the uplifting of arms embargo.

The Xi Jinping regime, however, is expected to tread cautiously on defence ties with Iran as it may look towards repairing the fragile ties with United States if Donald Trump is defeated in the presidential polls. With more and more surveys giving Joe Biden the edge, a recalibration in China's US policy could be on the cards.

(The above story first appeared on LatestLY on Oct 18, 2020 05:25 PM IST. For more news and updates on politics, world, sports, entertainment and lifestyle, log on to our website latestly.com).