'Iran Not Seeking Escalation or War, Acted in Self Defence', Says FM Javad Zarif After Missile Strike on US Bases in Iraq 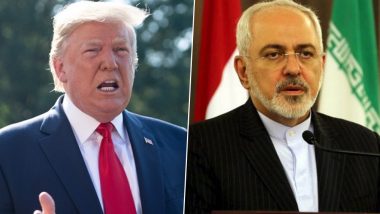 Tehran, January 8: Shortly after the devastating missile strikes at two US air bases in Iraq, Iran issued a statement claiming that it is not in favour of a military escalation or war. The strikes at the US bases, said Iranian Foreign Minister Javad Zarif, was an act of self-defence. The counter-attack by Tehran comes days after the assassination of Iran's elite Quds Force commander General Qassem Soleimani in an American drone strike. Donald Trump Reacts to Iran's 'Revenge Attack' on US Military Bases in Iraq, Says 'All is Well...Casualties Being Assessed'.

According to Zarif, Iran's actions are justified as the provisions of self-defence listed under Article 51 of the United Nations Charter. The Foreign Minister also suggested that Tehran would no longer climb the escalation ladder, stating that it has "concluded" the measures initiated as part of self-defence.

"Iran took and concluded proportionate measures in self-defense under Article 51 of UN Charter targeting base from which cowardly armed attack against our citizens and senior officials were launched," Zarif said, adding, "We do not seek escalation or war, but will defend ourselves against any aggression."

Iran took & concluded proportionate measures in self-defense under Article 51 of UN Charter targeting base from which cowardly armed attack against our citizens & senior officials were launched.

We do not seek escalation or war, but will defend ourselves against any aggression.

At 17:30 hours (EST), dozens of rockets flew from Iran and struck at the US military bases in Abril and al-Asad in western Iraq. The bases also housed the residential quarter of the American troopers. Although the death toll is not out, the strikes are suspected to have inflicted massive casualties. The US Defence Department, in its statement, said the damages are currently being assessed.

(The above story first appeared on LatestLY on Jan 08, 2020 09:08 AM IST. For more news and updates on politics, world, sports, entertainment and lifestyle, log on to our website latestly.com).