A military plane crashed in Myanmar's Mandalay region due to severe weather on Thursday morning, a military spokesperson said. 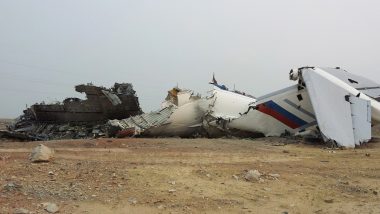 With 14 people on board, the military plane travelling from the capital city Nay Pyi Taw to Pyin Oo Lwin, crashed in Pyin Oo Lwin of Mandalay region at around 8 a.m.,Major General Zaw Min Tun of the Information Team of the State Administration Council, told Xinhua news agency.  UN Says 100,000 People Flee Amid Attacks by the Army in Eastern Myanmar

He said the number of casualties has yet to be known as the rescue operation is being carried out, while the Mandalay Region Fire Department's social media page said 12 on board were killed.

Two people have been rescued and sent to the military hospital for treatment so far, the information team said.

(The above story first appeared on LatestLY on Jun 10, 2021 01:17 PM IST. For more news and updates on politics, world, sports, entertainment and lifestyle, log on to our website latestly.com).