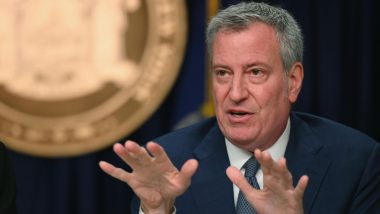 Building on the success of the Open Restaurants and Open Streets programs, Open Storefronts, which will run from October 30 till December 31, will allow the businesses to use a portion of their sidewalk to display merchandise, sell goods, complete transactions, and provide queuing areas, Xinhua news agency reported.

"This program is a part of an effort to make New York City the world's capital for healthy outdoor living and to advance the Mayor's recovery agenda, which is centred on public health and social justice," Xinhua news agency quoted a statement from De Blasio's office as saying on Wednesday.

"Rebuilding a fairer, better New York City means maximizing use of our outdoor space, helping businesses keep their employees, and giving New Yorkers more reasons than ever to shop local and enjoy their communities. Open Storefronts does all three," the Mayor was quoted as saying in the statement.

"This program builds on the successful legacy of our Open Streets and Open Restaurants programs, and I look forward to finding more ways than ever to reimagine our urban landscape," he added.

According to the program, an eight-foot clear path of sidewalk from the curb must be maintained for Open Storefronts to operate.

Retailers cannot use the space of adjacent businesses, and they must bring all furniture and goods indoors when closed.

Eight months into the pandemic in New York City, more than 1 million residents are out of work, and the unemployment rate is nearly double the national average, according to The New York Times.

(The above story first appeared on LatestLY on Oct 29, 2020 11:29 AM IST. For more news and updates on politics, world, sports, entertainment and lifestyle, log on to our website latestly.com).