The Russian Defence Ministry said that the Russian armed forces with Kalibr missiles destroyed workshops for the repair of damaged Ukrainian armoured vehicles. 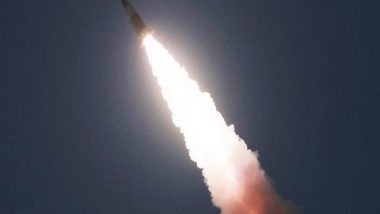 "In the evening of March 19 and in the morning of March 20, strikes were carried out with long-range precision weapons on Ukrainian military infrastructure facilities. From the waters of the Black Sea, Kalibr sea-based cruise missiles destroyed workshops for the repair of Ukrainian armoured vehicles damaged in combat operations," the statement says, RT reported. Did House of Democrats Ask Joe Biden To Relinquish Control of Nuclear Weapons? Here's The Truth.

At the same time, it is reported that Kalibr missiles from the waters of the Caspian Sea, as well as from the airspace over the Crimea, the Kinzhal complexes destroyed a large fuel and lubricants storage base near the village of Konstantinovka, Mykolaiv region.

The 3M-54 Kalibr, also referred to it as 3M54-1 Kalibr is a family of Russian cruise missiles developed by the Novator Design Bureau. There are ship-launched, submarine-launched and air-launched versions of the missile, and variants for anti-ship, anti-submarine and land attack use.

It is known that the new rocket is capable of speeds up to 6,000 km per hour, which is five times faster than the speed of sound. Its features are low flight trajectory and manoeuverability. All these factors complicate the detection of hypersonic missiles by satellites and special radars, UNIAN reported.

(The above story first appeared on LatestLY on Mar 20, 2022 08:38 PM IST. For more news and updates on politics, world, sports, entertainment and lifestyle, log on to our website latestly.com).