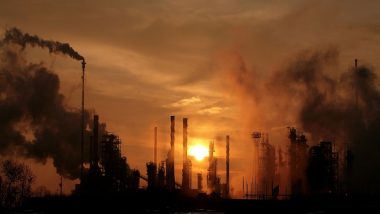 Riyadh, August 9: The profits of Saudi Aramco, the multinational petroleum company largely owned by the Kingdom of Saudi Arabia, plunged by 73 percent in the second quarter of financial year 2020-21. The unprecedented reduction is being attributed to the impact of COVID-19 pandemic on global oil trade. Why Is Narendra Modi Govt Not Building Planned Strategic Oil Reserves, Asks India's Former Petroleum Minister M Veerappa Moily Moily.

Even as the Brent and WTI crude oil prices have been hovering over $40, after dipping into negative in April this year, analysts see the price recovery as a result of cut in production. The demand continues to remain at where it was around two decades ago.

Although the initial phase of Q2 showed signs of recovery, the travel restrictions imposed by several nations amid a "second wave" of coronavirus has further hit the oil prices. Flight services remain severely restricted, whereas, road routes are also curbed to facilitate only local commutation in several nation.

Saudi Arabia, since 2017, is spearheading with an alternative economic plan that it intends to implement by the year 2030. The Kingdom is hopeful of raising more than 50 percent of its income from non-oil sources in the next one decade. The 'Mission 2030' project is being overseen by the country's de-facto ruler - Crown Prince Mohammed bin Salman.

(The above story first appeared on LatestLY on Aug 09, 2020 04:06 PM IST. For more news and updates on politics, world, sports, entertainment and lifestyle, log on to our website latestly.com).