According to a report by The Verge, Microsoft is the only company so far to publicly acknowledge it was in talks with TikTok owner ByteDance for a possible acquisition. 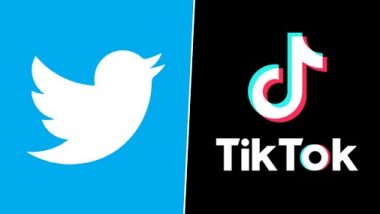 San Francisco, August 9: Amid uncertainties surrounding TikTok's business, Twitter Inc. is reported to have held talks about a potential merger with the popular video-sharing app. Reports inform that however, it is still unclear if Twitter will pursue a deal, which will involve TikTok’s operations in the US. On August 7, US President Donald Trump had signed executive orders banning TikTok and WeChat, terming the popular Chinese apps a threat to the country''s national security and economy. The ban comes into effect in 45 days, Trump said in two separate executive orders signed on Thursday. However, TikTok has said it plans to challenge the Trump administration’s order. US President Donald Trump Agrees to Give China's ByteDance 45 Days to Negotiate Sale of TikTok With Microsoft: Reports.

According to a report by The Verge, Microsoft is the only company so far to publicly acknowledge it was in talks with TikTok owner ByteDance for a possible acquisition. As per a report by the WSJ, Twitter would be considered a long-shot in a bid for TikTok, with Microsoft the likely front runner in any in bidding for video-sharing app’s U.S. operations. US President Donald Trump Signs Executive Order Banning Transactions With TikTok Parent ByteDance After 45 Days.

The report further adds that Twitter is much smaller than Microsoft due to which it could face less antitrust scrutiny than Microsoft. Moreover, Twitter also doesn’t have as much money as compared to Microsoft for a possible purchase. This means, Twitter would for sure, need help from other investors if it plans to buy TikTok.

According to reports, TikTok had on Friday threatened legal action against an executive order that US President Donald Trump issued, prohibiting the China-based company from doing business with the US firms after 45 days. TikTok said it was "shocked" by the recent executive order, which it said "was issued without any due process."

(The above story first appeared on LatestLY on Aug 09, 2020 08:45 AM IST. For more news and updates on politics, world, sports, entertainment and lifestyle, log on to our website latestly.com).