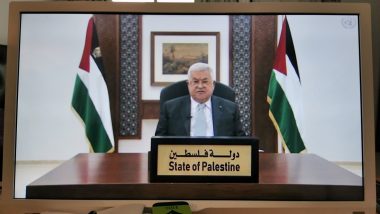 New York, September 25: Palestinian President Mahmoud Abbas virtually addressed the United Nations General Assembly (UNGA) on Friday. His speech, which was keenly awaited in the backdrop of new Arab-Israel bonhomie, focused on the core issue of Palestine that is left pending since 1967. Trump Says '5 or 6 More Middle East Countries' Will Sign Peace Deal With Israel.

To address the Palestinian question, Abbas said, a "Mideast conference" should be held "early next year". The President appealed UN Secretary General Antonio Guterres to bring all stakeholders and related parties onboard for the conference that should be aimed at finding a lasting solution to the six decades old conflict.

“It should aim to end the occupation and grant the Palestinian people their freedom and independence in their own state along the 1967 borders with East Jerusalem as its capital and settle final-status issues, notably the refugee question,” he said.

The leadership in Palestine was left devastated after two major Arab nations - the United Arab Emirates (UAE) and Bahrain - decided to sign a pact with Israel which not only leads to the recognition of the Zionist state by them, but also establishes full bilateral relations between the signatories.

United States President Donald Trump, who negotiated the pact between Israel and the UAE and Bahrain, hosted the signing of 'Abraham Accord' at the White House on September 16. At the event, Trump claimed that five or six more countries in the Middle East are "ready" to recognise Israel and normalise relations with the country.

Abbas, while referring to Abraham Accord during his UNGA address, said it would be "delusional" to comprehend that the conflict would be resolved while usurping the lands and rights of Palestinians.

"You should all know that there can be no peace, no security, no stability or coexistence in our region without an end to the occupation and without a just and comprehensive solution to the Palestinian question," he said.

The signing of peace pact between Israel and UAE, and Israel and Bahrain, has further divided the gap Gulf states. Iran and Turkey, the two ideological opponents of Saudi Arabia, has blamed the Arab states of "betraying oppressed Muslims" and toeing the US line of Israel-Palestine conflict.

(The above story first appeared on LatestLY on Sep 25, 2020 09:28 PM IST. For more news and updates on politics, world, sports, entertainment and lifestyle, log on to our website latestly.com).