United States Economy Adds Only 245,000 Jobs in November; US Unemployment Rate Drops to 6.7%

The United States economy added 245,000 jobs in November, the fewest since April amid the rising COVID-19 cases in the country. The US Department of Labour released its monthly jobs report on Friday. The US economy reportedly has 10 million jobs less than pre-coronavirus level. 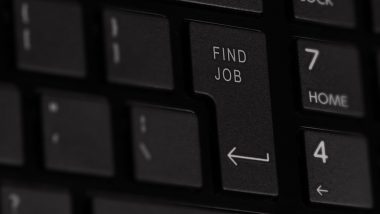 Washington, December 4: The United States economy added 245,000 jobs in November, the fewest since April amid the rising COVID-19 cases in the country. The US Department of Labour released its monthly jobs report on Friday. Notably, the unemployment rate in the US dipped to .7 percent from an all-time high of 6.9 percent.

According to the country’s Labour Department, the November’s job gain in the US was down from 610,000 in October. The less number of jobs were created in the US due to stay-in-place measures and curfews across the nation. Unemployment Rate in US: Jobless Claims Remain High in America at 712,000 as COVID-19 Escalates.

According to reports, the US economy has 10 million jobs less than pre-coronavirus level.  A bipartisan group of senators has proposed a $900-billion plan that would include expanded unemployment benefits, more small business loans and aid to state and local governments, reported Associated Press.

Meanwhile, two enhanced federal unemployment benefits programs will be expiring in December. If the country’s administration failed to announce another economic rescue package, approximately more than nine million unemployed people would be left without any jobless aid. US Unemployment Drops to 7.9% One Month Before Election Day.

Coronavirus cases in the US have increased drastically since November. A total of 210,000 people contracted the virus in the past 24 hours. The country also reported 2,907 deaths in the same period. On Thursday, more than 100,000 people were hospitalised in the country for the first time. Till now, over 14,546,000 people have contracted COVID-19 in the US, while close to 283,000 patients have succumbed to the deadly virus.

(The above story first appeared on LatestLY on Dec 04, 2020 08:49 PM IST. For more news and updates on politics, world, sports, entertainment and lifestyle, log on to our website latestly.com).

Comments
Tags:
Coronavirus COVID-19 Pandemic United States US Department of Labour US economy US Unemployment Rate
Comments
You might also like