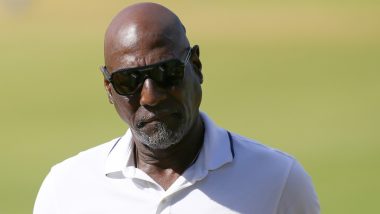 West Indies cricket great Sir Vivian Richards has come out in support of the ‘Tibetan independence movement’, which presses for separation of Tibet from China. Tibet is an autonomous region of China. Since 2013, every year on February 13, 'Tibetan Independence Day' is celebrated as the anniversary of the five-point proclamation issued by the 13th Dalai Lama in 1913. Coincidentally, this year the 'Tibetan independence day' falls on the the second day of Tibetan New Year (Losar). The Tibetan New Year is calculated based on the Tibetan calendar, which is a lunisolar calendar. Tibetan New Year 2021: Lobsang Sangay Extend Greetings on Losar.

The legendary figure in the cricket world, Viv Richards, took to Twitter and wrote “Happy Independence Day, Tibet" Way To Go #FreedomForTibet.” Richards was known for his fearless approach with the bat throughout his career.

(The above story first appeared on LatestLY on Feb 13, 2021 12:22 PM IST. For more news and updates on politics, world, sports, entertainment and lifestyle, log on to our website latestly.com).