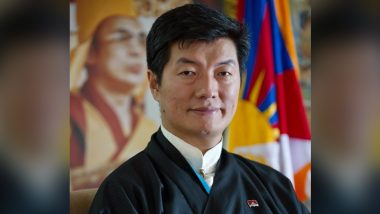 "On this joyous occasion of Tibetan New Year, I, on behalf of the CTA, extend heartfelt greetings to His Holiness the 14th Dalai Lama of Tibet, religious leaders and representatives of Tibetan Buddhism and all Tibetan brothers and sisters in Tibet and throughout the world celebrating Tibetan New Year," he said in a statement.

Hoping that this New Year brings all good health, he said the situation inside Tibet "remains grave".

"Although we welcome the news of the recent release of language activist Tashi Wangchuk, we must not forget that he was falsely charged and wrongfully sentenced to five-year imprisonment. Similarly, the case of 19-year-old monk Tenzin Nyima who died of severe beating and torture by the Chinese authorities days after the enactment of the Tibetan Policy and Support Act of 2020 is a clear indication that the situation inside Tibet is worsening particularly after the US passed TPSA into law," he said.

Sangay said the US law "sends a powerful message of hope and justice to Tibetan inside Tibet and reinforces US support for religious freedom, the reincarnation system, environmental protection and Tibetan democratic system in exile, especially acknowledging the CTA and the Sikyong as the legitimate institution and representative of the Tibetan diaspora around the world is a significant achievement for Tibet's issue".

Keeping in mind the Covid-19 pandemic, he appealed everyone to prioritise maximum precautions during Losar festivity.

Hundreds of Tibetans and their spiritual leader, the Dalai Lama, who have been living in exile at McLeodganj near here in Himachal Pradesh for over half a century, on Thursday began celebrations of the three-day New Year festival.

(The above story first appeared on LatestLY on Feb 13, 2021 11:44 AM IST. For more news and updates on politics, world, sports, entertainment and lifestyle, log on to our website latestly.com).