A 28-year-old civil engineer was arrested on Saturday for allegedly flashing his genitals at a woman in a metro train earlier this week, police said. 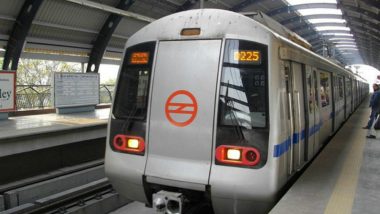 New Delhi, February 15: A 28-year-old civil engineer was arrested on Saturday for allegedly flashing his genitals at a woman in a metro train earlier this week, police said. The accused has been identified as Abhilash Kumar, a resident of sector 22, Gurgaon. He is a native of Karnal, works at a private company in Gurgaon and is unmarried, they said.

As FIR was earlier filed in the case in which a woman had alleged that she was harassed in a metro train by a man's "obscene behaviour", DMRC authorities said on Saturday. The woman had narrated the alleged incident on Twitter late Wednesday night, saying that a man had flashed his genitals at her in a coach when she was travelling on the Yellow Line. Delhi Police Arrest Man Who Flashed His Penis at Woman Inside Metro at Sultanpur.

Taking to twitter, DMRC said, "Suspect in the Sultanpur case has been traced by the DMRC Security Cell & AFC. He was tracked using the phone number used for an online payment for his card. DMRP has taken him into custody. The case could be solved because of the prompt assistance & action by the Police."

The Delhi Commission For Women had on Friday issued notices to the Delhi Police and the DMRC after the woman had alleged that she was harassed in the metro train. In a series of tweets, the woman had claimed on Wednesday night that when she was returning to Gurgaon in a metro train, a man standing and facing her had flashed his genitals. She also posted a picture of the man on the microblogging website. Mumbai: Man Flashes Private Parts to a Girl at ATM, Arrested With The Help of Her Video.

In a statement issued earlier on Saturday, the DMRC had said, "A complaint regarding obscene behaviour by a male passenger was received on DMRC's official Twitter handle. The DMRC, on its part, intimated the Ghitorni Police Station and also contacted the complainant, assuring her of all cooperation possible. Subsequently, an FIR has been filed at the Ghitorni Police station and the issue is under investigation by Police".