The China Manned Space Engineering Office had allayed global fears that the falling debris would cause any damage. 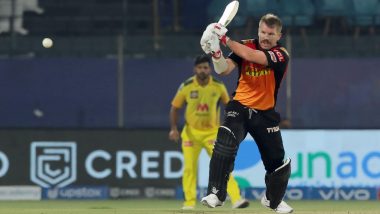 Male, May 11: Nearly 37 Australian cricketers, officials and coaches were rattled by the sonic boom of Chinese rocket debris that crashed into the Indian Ocean on Sunday. The Aussies, including Test stars Steve Smith, David Warner and Pat Cummins, are quarantining at a resort here after the Indian Premier League (IPL) was postponed indefinitely due to a bio-bubble breach. Kevin Pietersen Requests People in India To Stay Safe in a Twitter Post in Hindi, Says ‘I May Have Left India but the Country Is in My Thoughts’.

"We heard the bang around 5.30 a.m. this morning (Sunday). Experts say the noise we heard is the crack in the atmosphere which sets off a wave of sound not the actual impact of the rocket," Warner told The Australian from Maldives. The contingent will fly back to Australia once it completes the quarantine period mandated by the country. CSK Share Throwback Video of Top Moments in IPL 2021, Leave Fans Emotional.

China had, on April 29, launched a module for setting up its first permanent space station in orbit and it was known that the rockets carrying the main module would re-enter the earth's atmosphere around Saturday or Sunday. The China Manned Space Engineering Office had allayed global fears that the falling debris would cause any damage, saying that most of the debris "would burn up in the atmosphere".

But the uncontrolled re-entry into the atmosphere, with some remnants falling at a few locations in the Maldives, has drawn flak from the National Aeronautics and Space Administration (NASA). Earlier, the Board of Control for Cricket in India (BCCI) had sent the Aussies to the Maldives as there is a ban on direct flights to Australia due to the Covid-19 situation in India.

(The above story first appeared on LatestLY on May 11, 2021 05:16 PM IST. For more news and updates on politics, world, sports, entertainment and lifestyle, log on to our website latestly.com).