The judgement relates to TDS on payment to non-residents exempted under DTAA and Jain has said that the CBDT needs to issue a clarification. 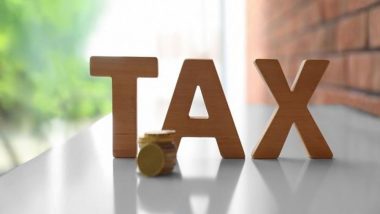 New Delhi, July 15: The recent judgement of the Supreme Court in the case of PILCOM falls in the same category where the CBDT will have to come out with a clarification and amend the law if the need arises, according to tax expert Ved Jain. The judgement relates to TDS on payment to non-residents exempted under DTAA and Jain has said that the CBDT needs to issue a clarification.

Jain said that the judgement does not really reflect the intent of the tax administration. There is no reason why a deductor should deduct TDS despite the fact that the payee has to ultimately claim refund of the same, that too with interest. The same only leads to additional paperwork, compliance and fund flow impact both at the end of the taxpayer and the tax administration. Thus, there is an urgent need to redress this issue which CBDT can do by issuing a circular and subsequently amending the law, if need be. GST on Alcohol-Based Hand Sanitisers: Finance Ministry Defends 18% Tax, Says Lower Rate 'Against Policy of Atmanirbhar Bharat'.

"Many a times, when a decision is pronounced by the Supreme Court which is not in line with the intention of the Tax Department and causes hardship to an assessee, the CBDT comes out with appropriate clarification to safeguard the interest of the taxpayers or amend the law to remedy the situation. This judgement of Supreme Court in the case of PILCOM falls in the same category as it does not really reflect the intent of the tax administration," Jain said.

The intention could not as such be to require a taxpayer to deduct TDS despite the amount not being chargeable to tax by virtue of the DTAA and then to issue refund of the same amount with interest. The principle being followed in respect of the general and residuary provision of section 195 should equally apply in respect of specific TDS provisions, Jain said.

He said that way back in 1995, when a similar issue had arisen, the CBDT in the context of Section 195 had issued a circular and clarified that TDS should be deducted as per Rates in Force, i.e., rate as per the Finance Act or the rate as per the DTAA, whichever is beneficial. Here the controversy was whether a deductor is required to deduct tax at source at the rate prescribed in the Finance Act or the rates stated in DTAA.

In fact, the Finance Act is enacted every year, every year it prescribes the tax rates in force for tax deduction at source, and still it was clarified by the CBDT that such rates or rates as per DTAA, whichever is beneficial, shall apply for TDS. Jain said this clarification was issued to implement the intent of law, i.e., to collect tax to the extent the deductee is liable and not more than that. If the deductee is liable to no tax or lower tax, there is no reason why tax should be deducted of such person or at a higher rate as the case may be.

The CBDT having clarified the intent in the context of Section 195 of the Act, there is urgent need to issue a similar circular in respect of tax rates prescribed under specific non-resident related TDS provision as well. "Further, in due course, the law may also be suitable amended to bring such specific TDS provisions at parity with the provision of Section 195 of the Act and the TDS be required to be deducted at the rate specified in the respective provision or the rate prescribed in the DTAA, whichever is beneficial," Jain added.

In the absence of such a circular, it will create a chaos in respect of all such payments such as of interest made in respect of borrowings in the past on which tax has not been deducted in view of DTAA provision. Now, all such persons will be declared defaulters as tax has not been deducted as per the rates prescribed in the Income Tax Act, and all such persons will be required to deposit tax which was required to be deducted, Jain added. Once such tax is deposited, the non-resident deductee will become entitled to claim refund of the entire tax so deposited as there is no liability on such non-residents to pay tax in view of DTAA.

"Thus, the entire exercise will be a zero sum game but with a lot of administrative hassles, paper work and of course litigation as usual. These litigations may not be limited between taxpayer and tax administration but will get extended between deductor and deductee as many of such non-residents after claiming such refund may not return such refund to the deductor causing a loss not only to Indian resident deductor but also to the nation as such money will go out of the country and that too in precious foreign currency," he said.

Jain said that since these payments are being made regularly to non-residents exempt under DTAA, there is an urgency for the CBDT to issue clarification at the earliest so as to avoid possible dispute between the deductor and the deducted. The deductor will like to get tax deducted and the deductee will resist such deduction as he is not liable to pay tax under DTAA. By issuing such clarification expeditiously, the CBDT will help in improving the Indian position of ease of doing business in the country, where one of the considerations is ease in paying/complying with tax laws.

"When India is looking forward and aiming to become ‘Aatmanirbhar', each step will help in achieving this objective of ‘Aatmanirbhar Bharat'. A proactive tax neutral clarification will definitely be a good step forward," Jain added.

(The above story first appeared on LatestLY on Jul 15, 2020 09:06 PM IST. For more news and updates on politics, world, sports, entertainment and lifestyle, log on to our website latestly.com).