More than 1,800 private schools in Delhi have issued their first list of shortlisted students for admission to entry-level classes on Friday, Delhi government's Directorate of Education (DoE) said. 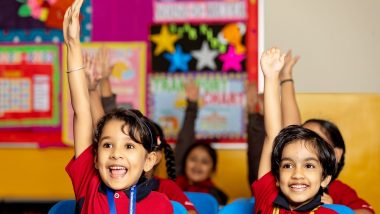 The merit list along with a waiting list of students was issued on the notice board and the official websites of the schools, they said. The draw of lots was conducted under videography and its footage will be maintained and retained by the schools. The slips were shown to the parents before being put inside the box. The second list of shortlisted students will be out on February 6. Delhi School Admissions 2023: First List of Shortlisted Students for Admission to Over 1,800 Private Schools To Be Out Tomorrow.

Speaking about the admissions, the principal of ITL public school Sudha Acharya said students who got 90 points or above in the draw got their names for admission directly and names for 142 seats were issued along with a waiting list on Friday.

“Our school conducted the draw of lots on Thursday evening and the list of students was issued on our notice board as well as the school website on Friday,” she told PTI.

“We have issued names for all 142 seats along with a waiting list. There are 190 seats in total and 25 per cent of it goes to economically weaker sections (EWS),” Acharya said.

A child needs to be at least four years old to fill out the form for nursery admission. The age limit is five years for admission in kindergarten and at least six years for class one as on March 31, 2023.

Ahlcon Public school in Mayur Vihar Phase-1 which has 120 seats in total for nursery, issued names of 72 students in their first merit list on Friday after conducting a draw of lots.

“We have 120 seats for nursery and the names of 72 students have been declared in the first list. There are many applicants who have the same points and for them, we will conduct another draw of lots to fill the remaining 48 seats,” the head of Ahlcon Public School, Ashok Pandey told PTI. “Points were given on the basis of distance, children of school alumni and siblings of existing students,” he said.

The registration process for admission to entry-level classes in more than 1,800 private schools in Delhi for the 2023-24 academic session had begun on December 1 and ended on December 23. RC Jain, president of Delhi State Public School's Management Association said several schools don't issue a waiting list or a second list of students as the seats fill up after the first draw of lots.

There are approximately 2 lakh seats across all private schools for nursery excluding the EWS category and names of almost 1 lakh students were issued on Friday itself, he told PTI.

“No deviation from the above schedule shall be permitted. Each school shall display the aforesaid admission schedule on its notice board and website. Further, each school shall ensure that application forms for admission are made available to all applicants till the last date of submission,” the DoE circular had said.

It said a non-refundable amount of only Rs 25 can be charged as the admission registration fee. The purchase of the prospectus of a school by the parents will be optional, it said.

According to the circular, all private schools will reserve 25 per cent seats for EWS and disadvantaged group (DG) students as well as for differently-abled children.