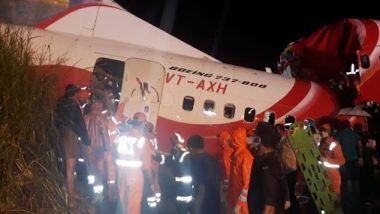 Malappuram, August 9: The condition of at least 14 passengers of the ill-fated Air India Express flight that crashed while attempting to land at the Karipur airport here, remains critical, Malappuram District Collector K Gopalakrishnan said on Sunday.

Eighteen people, including the pilot and co-pilot of the AIE flight from Dubai lost their lives, when it overshot the tabletop runway at the airport here while landing in heavy rains and fell into a valley 35 feet below and broke into two portions on Friday night. Also Read | ISKON to Celebrate Janmashtami on August 12: Live Breaking News Headlines & Coronavirus Updates on August 9, 2020.

The remains of co-pilot Akhilesh Kumar were cremated on Sunday with attendance from all family members as well as officials of Air India and Air India Express at Mathura, his hometown, it said.