The journalist was detained for nearly four hours. He has also sustained injuries on his nose, shoulder, back and ankle, the magazine alleged, adding he has filed a complaint with the Delhi Commissioner of Police. Police, however, refuted the allegation, terming it as "false". It said the allegation is being made only to escalate the situation. 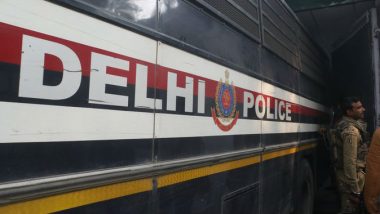 New Delhi, October 17: The Caravan magazine has alleged that police detained and assaulted their journalist while he was reporting a protest in North Delhi's Model Town, but the police denied the charge and asserted that it acted as per law. In a tweet, the magazine alleged that police forcibly took the phone from journalist Ahan Penkar, 24, and then deleted all the videos he had recorded while reporting. Journalist Rajeev Sharma Arrested Under Official Secrets Act For Allegedly Having Defence-Related Classified Documents.

The journalist was detained for nearly four hours. He has also sustained injuries on his nose, shoulder, back and ankle, the magazine alleged, adding he has filed a complaint with the Delhi Commissioner of Police. Police, however, refuted the allegation, terming it as "false". It said the allegation is being made only to escalate the situation.

It claimed the journalist was among the protesters who were detained for violating coronavirus-related restrictions and was subsequently released. The police action is bonafide and is as per law, it said.

Police also said that it issued a notice to the journalist for his statement and questioning in connection with the matter. According to police, a matter of suicide by a girl working as a domestic help in the house of a 74-year-old widow was reported on October 4 at Model Town police station.

Her body was found hanging with a bedsheet. The door was bolted from inside and was broken by the Fire Services staff in the presence of local police, police said.

Inquest proceedings were conducted and the post-mortem was done on October 8 by a board of doctors from Safdarjung Hospital and the findings are that the death had occurred due to asphyxia as a result of antemortem hanging by ligature material and is suicidal in nature, police said.

The body was cremated by the family members at the cremation ground in Wazirpur on October 8. No foul play has come to notice so far in the investigation, it said.

“On Friday, some protesters staged a demonstration outside Model Town police station to put undue pressure on police and tried to give the incident a different narrative. Despite explaining the facts of the case and repeated warnings to disperse, a few people remained adamant.

"They flouted the DDMA guidelines issued in the wake of the epidemic,” Deputy Commissioner of Police (northwest) Vijayanta Arya said.

The demonstrators were detained for violation of the DDMA order. A case has also been registered for the violations under relevant sections of IPC, Epidemic Act and DDMA Act, she said.

One Ahan Penkar, who was also seen protesting among the crowd, was also detained and subsequently released, police claimed.

He later claimed to be a press person and had alleged misbehaviour by the police, the DCP said.