The apex court was hearing a plea of the Uddhav Thackeray-led camp of Shiv Sena seeking stay on the proceedings before the Election Commission of India on the Eknath Shinde group's claim for recognition as the 'real' Shiv Sena. 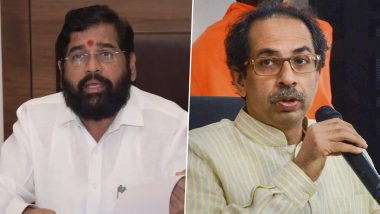 New Delhi, August 4: The Supreme Court on Thursday said it may decide on August 8 whether to refer some issues involved in the Maharashtra political crisis to a five-judge Constitution bench.

A bench of Chief Justice NV Ramana and Justices Krishna Murari and Hima Kohli also asked the Election Commission of India not to decide the application filed by Maharashtra Chief Minister Eknath Shinde camp for recognition as the 'real Shiv Sena' party and allotment of the bow and arrow symbol to it.

It told the Election Commission that if the Uddhav Thackeray-led camp seeks time to file a response to its notices on Shinde camp's petition, it should consider their request of adjournment. The bench asked the poll panel to allow the Thackeray camp to file their affidavits and not to take precipitative action.

"We will decide whether to refer the matter to a five-judge Constitution bench. The Election Commission of India has decided on August 8 to submit reply by Uddhav Thackeray-led faction (on the application of Shinde group claiming real Shiv Sena party and for symbol request). They will seek time. Election Commission to grant reasonable adjournment. We will take a call by Monday," the bench said in its order. Maharashtra Political Crisis: 'Never Left Shiv Sena, Its Intra-Party Dispute Not Defection,' Shinde Camp Tells Supreme Court.

The apex court was hearing a plea of the Uddhav Thackeray-led camp of Shiv Sena seeking stay on the proceedings before the Election Commission of India on the Eknath Shinde group's claim for recognition as the 'real' Shiv Sena.

Filing the application, Subhash Desai, the General Secretary of Shiv Sena, has said that the Election Commission can't decide the matter since the cases are pending before the Supreme Court. The application was filed against the proceedings initiated by the Election Commission of India on a request made by Eknath Shinde-led faction for recognition as the 'real' Shivsena and their claim over the party's election symbol - the bow and arrow.

On July 22, a notice was served to the Uddhav Thackeray-led faction wherein the Commission had stated that Eknath Shinde and some other persons have sought to be recognised as the 'real' Shiv Sena and are claiming right over the election symbol, the application said. The Commission had sought Thackeray camp's response by August 8.

Yesterday, Shinde group told the Supreme Court that the rebel MLAs never left the Shiv Sena party and said that was no split in the party. Senior advocate Harish Salve appearing for the group said that it was "not anti-party, but intra-party" dispute after Uddhav Thackeray-led camp claimed that these MLAs stand disqualified for anti-party activities.

"I am a dissenting member within the party. I am part of Shiv Sena. Within the party, there has to be democracy. I am saying that there are two groups within the Political Party," Salve had said while representing Shinde group.

Senior advocate Kapil Sibal, representing Thackeray camp, on Wednesday contended that Shinde group was called for party meeting, they went to Surat and then to Guwahati. "They wrote to Deputy Speaker, they appointed their Whip. By their conduct Shinde group has given up the party membership, they can't claim to be original party, the tenth schedule does not allow that," Sibal had submitted.

Sibal had said he hasn't seen in the history of this court that in the tenth schedule case a party comes and says they have given the membership of the party. That is why conduct has to be seen to decide whether membership has been given up, he contended.

Earlier, the Supreme Court 3-judge bench had said that some of the issues involved in the Maharashtra political crisis may require to a larger Constitutional bench for consideration. It had also asked the Speaker of the Maharashtra Legislative Assembly, Rahul Narwekar not to take any action on the new disqualification notices issued against the members of Shiv Sena.

There are various petitions pending before the apex court filed by both the factions of Shiv Sena. Uddhav Thackeray-led faction had approached the top court challenging the Maharashtra Governor Bhagat Singh Koshiyari's decision to invite Eknath Shinde to form the government and also the Speaker's election and floor test. Recently they had challenged the Shinde group approaching poll panel claiming they are 'real Shiv Sena'.

They had also challenged the newly appointed Maharashtra Assembly Speaker's action recognising the whip of Chief Minister Eknath Shinde group as the whip of Shiv Sena. The plea said newly appointed Speaker has no jurisdiction to recognise whips nominated by Shinde as Uddhav Thackeray is still the head of Shiv Sena official party.

Shinde group challenged the disqualification notices issued by the Deputy Speaker to 16 rebel MLAs as well as the appointment of Ajay Choudhary as Shiv Sena Legislature Party leader, is also pending before the apex court.

On June 29, the top court gave a go ahead to the floor test in the Maharashtra Assembly on June 30. Refusing to stay the Maharashtra Governor's direction to the then Chief Minister Uddhav Thackeray to prove his majority support on the floor of the House on June 30, the bench had issued notice on Prabhu's plea against floor test.