Are Israel and Donald Trump’s Attacks On Iran Deal, Gradual Steps Towards Walking Out Of P5+1 Agreement?

Israeli Prime Minister Benjamin Netanyahu has claimed that the Iran nuclear deal is based on lies and that Iranian officials were "brazenly lying" when they said Iran wasn't pursuing nuclear weapons. 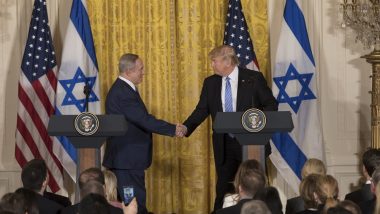 Israeli Prime Minister Benjamin Netanyahu has claimed that the Iran nuclear deal is based on lies and that Iranian officials were "brazenly lying" when they said Iran wasn't pursuing nuclear weapons.

"The nuclear deal is based on lies. It's based on Iranian lies and Iranian deception. Iran is brazenly lying when it said it never had a nuclear weapons programme. Iran planned at the highest level to continue work related to nuclear weapons under different guises and using the same personnel," CNN reported Netanyahu as saying during an address from the Israel Ministry of Defense in Tel Aviv.

Iran maintained that it had only been pursuing nuclear energy.

Netanyahu's presentation came less than two weeks before U.S. President Donald Trump is due to decide whether to continue to abide by the 2015 deal by waiving U.S. sanctions on Iran.

Trump, who has been highly critical of the Iranian nuclear deal and has frequently talked about walking out of it told reporters that scrapping the deal does not mean that he would not negotiate a new deal. "In seven years that deal will have expired, and Iran is free to go ahead and create nuclear weapons. That's not acceptable. Seven years is tomorrow. That's not acceptable," Trump said responding to a question during a joint news conference with the visiting Nigerian President.

He supported the statement of the Israeli Prime Minister Benjamin Netanyahu in this regard. "That is just not an acceptable situation. I've been saying that's happening. They're not sitting back idly. They're setting off missiles which they say are for television purposes. I don't think so," he said. Trump has to make a decision by May 12 on America's continuation in remaining in the deal.

"We'll see what happens. I'm not telling you what I'm doing, but a lot of people think they know. On or before the 12th, we'll make a decision. That doesn't mean we won't negotiate a real agreement. You know, this is an agreement that wasn't approved by too many people. And it's a horrible agreement for the United States," Trump said.

The Iran nuclear deal was signed between six countries in 2015 - Iran, US, Britain, Germany, Russia, France and China for lifting economic sanctions on Tehran in exchange for limitations to the country's nuclear programme.

A White House statement said there were "new and compelling details" in Netanyahu's material. "These facts are consistent with what the United States has long known: Iran has a robust, clandestine nuclear weapons programme that it has tried and failed to hide from the world and from its own people," the statement went on.

However, European powers – UK, France and Germany have said they are committed to upholding the accord. "We have never been naive about Iran and its nuclear intentions," said a UK government spokesperson late on Monday. "That is why the IAEA inspection regime agreed as part of the Iran nuclear deal is one of the most extensive and robust in the history of international nuclear accords."

A German government spokesman said the country would carry out a detailed analysis of Israel's intelligence, Reuters reported.

The BBC reports that it spoke to John Hughes, a former deputy director for sanctions at the U.S. State Department who worked on the Iran deal, said he had not seen anything in the Israeli presentation that would change the deal. "I think, frankly, this was a political statement meant to try to influence President Trump's decision on whether to pull out of the deal," Hughes said. "I think it's mostly recycled material."

Furthermore, monitors from the IAEA have been able to carry out snap inspections at Iranian nuclear sites and have not raised any suspicion of Tehran attempting to resume its earlier nuclear programme. (With Agency inputs)

(The above story first appeared on LatestLY on May 01, 2018 05:30 AM IST. For more news and updates on politics, world, sports, entertainment and lifestyle, log on to our website latestly.com).