Kanye West Vows to ‘Restore’ Family With Kim Kardashian, Says ‘I’m Going to Come on This Joint and Try to Save My Family’ 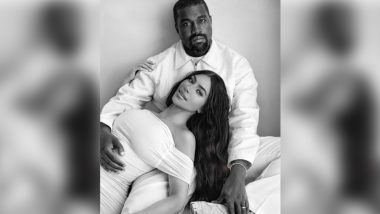 Ye, formerly known as Kanye West, hopes to restore his family with his estranged wife and beauty mogul Kim Kardashian. According to E! News, the rapper, on Wednesday, gave an impassioned speech about the importance of family while visiting the LA Mission homeless shelter. He said he wants to "restore" his family with Kim and their four kids, North, Saint, Chicago and Psalm. "Now it's time to restore the families this Thanksgiving. It's all about restoring the family. This morning I felt so blessed to wake up, to work out and be able to drive to my house and see my wife and my kids," he shared. Kim Kardashian and Ex Kanye West Join Friends For Dinner in Malibu.

Ye continued, "That's right. I said my wife and my children, and I want everyone to pray for my family." It seems the rapper is intent on getting back with Kim, who recently started dating 'Saturday Night Live' comedian Pete Davidson. Ye added that he believes people can change, explaining, "The narrative that God wants is for you to see that everything can be redeemed in all these relationships. We made mistakes. I've made mistakes." Kim Kardashian, Kanye West Spotted Together Ahead of Her First Saturday Night Live Hosting Gig.

"I've publicly done things that were not acceptable as a husband. But I'm here to change that narrative," he admitted. Kim and Ye split up earlier this year, with the 'Keeping Up with the Kardashians' alum keeping their USD 23 million Hidden Hills home in the divorce proceedings. However, Ye shared in his speech that he has a "house right next" to their former shared abode so he can be "next to my children as much as possible." "I'm doing everything to be right next to the situation," the 'Donda' performer said.

The Grammy nominee explained that he's trying to express himself in the "most sane" and "calm way possible," adding that he thinks it's important to discuss the subject so people see the importance of uniting families. "I am saying this because if the enemy can separate Kimye, there is going to be millions of families that feel like that separation is OK. When God, who has already wanted his soul, brings Kimye together, there's gonna be millions of families that are going to be influenced and see that they can overcome, could work as a separation of trauma," he continued.

Ye previously said that he isn't ready to give up on his marriage to Kim. During an appearance on Revolt TV's Drink Champs podcast, he shared, "At the end of the day, I ain't got the paperwork yet, so I'm going to come on this joint and try to save my family and keep my family together." He added that their four children "want their parents to stay together." A source close to Kim told E!News in November that the makeup mogul is ready to move on from their relationship. According to the insider, "There's no chance for reconciliation at this point." A second source noted that Kim "tried for a long, long time" to make their marriage work but eventually "reached her breaking point."