A week after announcing the musical love saga titled 'Satyanarayan Ki Katha' starring Kartik Aaryan in the lead, the makers of the movie have decided to change the name of the film to avoid hurting any sentiments. 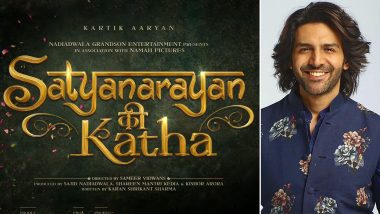 "A title of the film is something that emerges organically through the creative process. We have taken a decision to change the title of ur recently announced film 'Satyanarayan ki Katha' to avoid hurting sentiments even if that's purely unintentional. Producers of the film and the creative team also are in complete support of this decision. We will be announcing a new title for our love story in the due course of our journey," he tweeted. Kartik Aaryan Spotted At A Vaccination Centre Looking All Bright And Sunny (View Pics).

The decision comes after the title of the movie received backlashes over social media, after it was officially announced on June 23. Produced by Sajid Nadiadwala in collaboration with Namah Pictures, 'Satyanarayan Ki Katha' is all set to go on floors towards the end of this year. Nadiadwala also spoke about the upcoming project and said, "'Satyanarayan Ki Katha' has been a visionary project for me. We, at Nadiadwala Grandson Entertainment are excited to collaborate with Namah Pictures, national award-winning Director Sameer Vidwans and very talented Kartik Aaryan for this one."

"This will be our first time working with Kartik and he brings a new energy to the project, altogether. 'Satyanarayan Ki Katha' makes for a script that calls for this perfect union and we are looking forward to bringing this ultimate love story to the audience," Nadiadwala added.

The film will also mark Kartik's first collaboration with Nadiadwala. While the actor's previous ventures too were in the romantic space, the viewers will see him bring a narrative that has not been explored before with this one. The film promises to be an unforgettable love story. Apart from 'Satyanarayan Ki Katha', Kartik will also be seen in 'Bhool Bhulaiyaa 2' and 'Dhamaka'.