Even if City loses all its three fixtures and United wins its remaining matches, the side would still be able to reach just 79 points, one point behind City. This is City's third Premier League title win in the last four years. 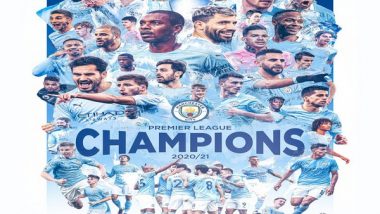 Manchester, May 12: Manchester City on Tuesday (local time) secured the Premier League 2020-21 title after Manchester United stumbled to a 1-2 loss against Leicester City here at Old Trafford. This loss meant United would not be able to overtake Manchester City in terms of points even if they win their remaining three fixtures in the league.

Manchester City currently has 80 points from 35 matches while United has 70. Even if City loses all its three fixtures and United wins its remaining matches, the side would still be able to reach just 79 points, one point behind City. This is City's third Premier League title win in the last four years.

Pep Guardiola's side will now be in action against Newcastle United in the Premier League on Friday. City is also in the finals of UEFA Champions League and the side will square off against Chelsea on May 29. This is City's fifth Premier League title win in the last decade. Manchester City Win EPL 2020-21 Title As Leicester City Beat Manchester United 2-1.

In the match against United, Leicester managed to take the lead in the 10th minute as Luke Thomas netted the ball into the goalpost. Thomas made a powerful strike at the far post from the edge of the six-yard box and United goalkeeper David de Gea was not able to hold on to the ball. Five minutes later, Manchester United got the equaliser through Mason Greenwood.

Amad Diallo gave a low cross to Greenwood and the latter took full advantage and he made a low diagonal shot and it went past the Leicester goalkeeper Kasper Schmeichel, bringing the scoreline to 1-1. No more goals were scored in the first half. Gianluigi Buffon Pens an Emotional Note for Juventus as He Announces Exit from Bianconeri, Says ‘Not an Easy Decision’.

Caglar Soyuncu gave Leicester a 2-1 lead in the 66th minute as he powered a header into the goalpost and United was handed a major blow with just 24 minutes remaining in the fixture. United was not able to register another goal, and in the end, the side had to stumble to a loss. The Red Devils will next lock horns against Liverpool on Thursday.