The series, which marks the return of actor Elisabeth Olsen as Scarlett Witch aka Wanda Maximoff, and Paul Bettany's super-powered android Vision 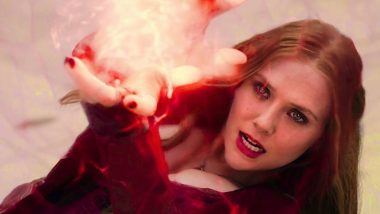 Marvel Studios' much-anticipated superhero series "WandaVision" will premiere on streaming platform Disney Plus on January 15, 2021. The series, which marks the return of actor Elisabeth Olsen as Scarlett Witch aka Wanda Maximoff, and Paul Bettany's super-powered android Vision, is being directed by Matt Shakman. This Day, That Year: When Chadwick Boseman was Announced as Black Panther by Marvel and His Co-Stars

The cast also features actors Kathryn Hahn, Debra Jo Rupp and Fred Melamed. Kat Dennings will reprise her role of Darcy Lewis from the “Thor” movies and Randall Park will return as Jimmy Woo, who appeared as an FBI agent in “Ant-Man and the Wasp.”

Actor Teyonah Parris will play an adult Monica Rambeau, a fellow Marvel superhero who last appeared as a little girl in “Captain Marvel.” "WandaVision" will also tie into the upcoming Marvel Studios' "Doctor Strange and the Multiverse of Madness" movie starring Benedict Cumberbatch.