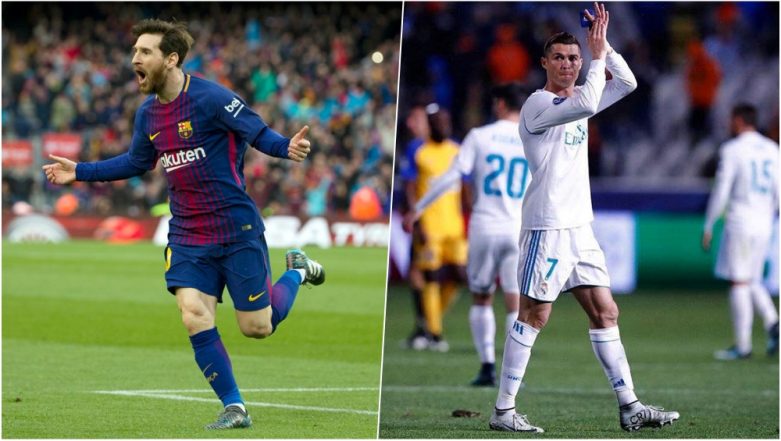 Leeds [UK], September 6: Former Manchester City player Micah Richards heaped praise on both Cristiano Ronaldo and Lionel Messi, calling them "unbelievable". In August, Liverpool defender Virgil van Dijk outclassed Ronaldo and Messi to win the UEFA Men's Footballer of the Year. However, Richards said that Ronaldo has been the best player across the world this year. Cristiano Ronaldo REFUSES to Wear Badge Given to him by Serie A For Winning Best Player Award.

"I think Ronaldo is the best this year because what he did for his country (Portugal) was amazing. He and Messi are unbelievable, Van Dijk also was good but what Messi and Ronaldo doing is amazing," Goal.com quoted Richards as saying. Richards has been involved with Ronaldo in many battles on the football pitch during his playing days. Cristiano Ronaldo Makes Fun of VAR After Scoring A Goal During Juventus vs Napoli, Serie A 2019 (Watch Video).

Ronaldo who used to be part of Manchester United was involved in many intense matches against Manchester City. The 31-year-old Richards might have labelled Ronaldo as the best this year, but he did not take Ronaldo's name when he was asked about who his toughest opponent was. Richards picked former Tottenham star Gareth Bale as his toughest opponent. He even had good things to say about Liverpool's striker Mohamed Salah.

"For me, it is Gareth Bale. When he was in Tottenham he was a top player and he still is. Me and him used to have one-on-one battles," Richards said."Salah is my friend, he is a top player. I think he will continue for more years. I played with him in Fiorentina and he was doing the same then. For me, I think he will be better and better and it is good that he has a manager who believes in him," he added.

Richards began his career at Manchester City, and he made 245 appearances across all competitions for the club, and he managed to win a Premier League title and an FA Cup.He later joined Aston Villa in 2015 and made 31 appearances for Villa until October 2016.He finally called time on his career in July 2019.