According to Deadline, the filmmaker has exited the project due to scheduling conflicts. 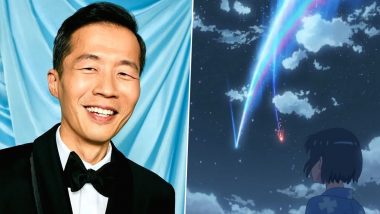 Lee Isaac Chung, the filmmaker behind critical hit Minari, will no longer be directing Paramount's live-action adaptation of the popular Japanese anime film Your Name. According to Deadline, the filmmaker has exited the project due to scheduling conflicts. The studio is now actively looking for Chung's replacement and has reached out to several potential suitors. The film adaptation of "Your Name" will be produced by filmmaker JJ Abrams via his Bad Robot Productions along with Lindsey Weber and Genki Kawamura, who produced the original. Robert Downey Jr Joins HBO’s Series Adaptation of Viet Thanh Nguyen’s ‘The Sympathizer’.

The anime, which is a sci-fi-infused love story, revolves around a teenage boy and girl from different parts of Japan who discover they can swap bodies. They also find out that they are separated by time as well as by space, and when a disaster threatens one of their towns, they figure out a way to meet and stop it from happening. The Alchemist: Sebastian De Souza, Tom Hollander, Shohreh Aghdashloo to Lead Film Adaptation of Paul Coelho’s Best-Selling Novel.

Chung had boarded the project after he won the grand jury and audience awards at Sundance Film Festival last year for his family drama feature "Minari". The movie was nominated for six Academy Awards earlier this year with actor Youn Yuh-jung taking home the best supporting actress trophy.