Paul McCartney's Docuseries is Releasing on Hulu on July 16 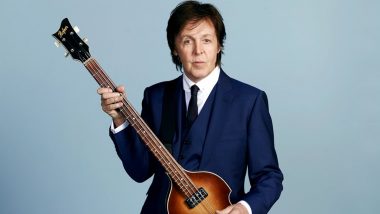 Hulu has recently announced that a six-part music docuseries titled McCartney 3,2,1 will be premiering on the OTT platform, on July 16. While there have been many documentaries on the Beatles and McCartney over the years, according to Variety what makes this one different is the fact that he will be speaking with Rick Rubin, one of the most successful producers of the last 30 years and a music geek of magnitude, who has worked with everyone from Tom Petty to Run-DMC, from Johnny Cash to Slayer, from Adele to the Red Hot Chili Peppers. The Me You Can’t See Trailer: Prince Harry and Oprah Winfrey Discuss Mental Health in Apple TV+’s New Documentary Series (Watch Video).

His experience and insights into songwriting and recording will likely provide a fresh take on McCartney's groundbreaking work with the Beatles, his group Wings, and his 51 years as a solo artist. "Never before have fans had the opportunity to hear Paul McCartney share, in such expansive, celebratory detail, the experience of creating his life's work -- more than 50 years of culture-defining music," Craig Erwich, president of Hulu Originals and ABC Entertainment, said in a statement. Prince Harry on His Apple Project ‘The Me You Can’t See’: This Docu-Series on Mental Health Gave Me Great Satisfaction.

He added, "To be an observer as Paul and Rick Rubin deconstruct how some of the biggest hits in music history came to be is truly enlightening. It is an honor that Paul chose to return to Hulu to share this one-of-a-kind series." 'McCartney 3,2,1' is the latest series to join Hulu's expanding slate of documentary content that examines influential figures from world history. The streaming service released the four-part documentary series 'Hillary' in March 2020, which examines Hillary Clinton's life and the 2016 election.

Later that year, Hulu's documentary film 'I Am Greta' featured an intimate portrayal of teen climate activist Greta Thunberg from the first solitary days of her school strike in August 2018 to her appearance at the United Nations Climate Summit in September 2019. Additionally, the 2016 documentary 'The Beatles: Eight Days a Week -- The Touring Years' is currently streaming on Hulu.