Kylian Mbappe Doubtful Over Future at PSG: ‘Is This the Best Place for Me?’ 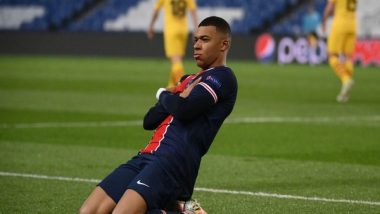 Paris, June 12: French forward Kylian Mbappe has a cloud of doubt whether Paris Saint-Germain is the right place for him or not. This doubtfulness has now added fuel to transfer speculations that would intensify even further after Euro 2020. The PSG talisman said he feels good at his current home, but has wondered aloud whether another location could prove even more joyous.

"I don't necessarily need to go fast. I have to make the right decision, which is difficult, and give myself every chance to make up my mind," Mbappe told France Football when asked about his immediate future. "I am in a place where I like myself, where I feel good. But is this the best place for me? I don't have the answer yet."

Mbappe, who has scored 42 goals in all competitions for PSG this season, has a contract at the French club until the end of June 2022 but he has been linked with a move to La Liga's Real Madrid. Kylian Mbappe Transfer News Update: PSG Forward Questions Future At French Club.

PSG has failed to win Ligue 1 this past season and their campaign in UEFA Champions League was halted by Manchester City in the semi-final. Earlier this week PSG president Nasser Al-Khelaifi reiterated that they will 'never sell' 22-year-old French international.

"I will be clear, Mbappe is going to stay in Paris," Al-Khelaifi told French daily L'Equipe. "We will never sell him and he will never leave on a free (transfer). Mbappe has everything he needs in Paris."