Pakistan wicketkeeper-batter Mohammad Rizwan on Sunday was named the ICC Men's T20I Cricketer of the Year. 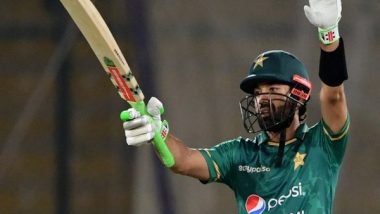 The Pakistan wicketkeeper-batter ruled the roost in 2021 when it came to the shortest format of the game. Aggregating a staggering 1326 runs in only 29 matches, Rizwan struck at an average of 73.66 and a strike rate of 134.89.

Apart from his exploits with the bat, he was as solid as ever behind the stumps, playing a key role in Pakistan's run to the semis during the ICC Men's T20 World Cup 2021, where he ended up as the third-highest run-scorer.

He also scored the maiden T20I century of his career against South Africa in Lahore early in the year and ended it continuing his form with a brilliant knock of 87 against West Indies in Karachi. With another T20 World Cup coming up next year, Pakistan will hope that Rizwan continues in the same vein.

Oman's Zeeshan Maqsood has been named as Men's Associate Player of 2021. Not only leading his side with aplomb, but Maqsood also flourished in both batting and bowling roles for Oman in 2021. He played a crucial role as a middle-order batter and picked up wickets consistently with his left-arm orthodox as well.

At the heart of his team's ICC Men's T20 World Cup campaign on home soil, Maqsood took on some of the Associate best across the year, as well as Bangladesh at the global tournament.

On the other hand, Austria's Andrea-Mae Zepeda has been named as Women's Associate Player of 2021.

Andrea-Mae Zepeda enjoyed her dream year in the international game, consistently at the top of the order for Austria while scoring her runs at a brisk rate.

Out of the eight T20Is, she played this year, three were against Belgium, while the other five came against Italy. Zepeda was destructive in the series against the Belgians in particular, as she registered 50+ scores, including a century, in all three matches against them.