Posting on Monday (May 2) the collective hacked the website of the Chengdu Pidu District Committee of the Chinese People's Political Consultative Conference, reported Taiwan News. 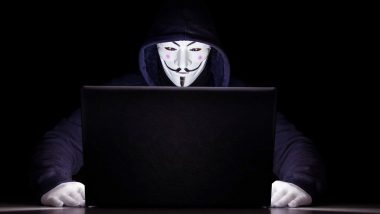 Taipei, May 7: The hacker group Anonymous took a break from the cyberwar in Russia and hacked Chengdu Chinese Communist Party (CCP) website warning Beijing to "not try anything stupid against Taiwan" in the wake of Russia's invasion of Ukraine. Posting on Monday (May 2) the collective hacked the website of the Chengdu Pidu District Committee of the Chinese People's Political Consultative Conference, reported Taiwan News.

In a new HTML page created on the website, Anonymous included its logo, followed by a photo of a person wearing a black hoodie and Guy Fawkes mask. The "Taiwan Numbah Wan!" meme appears, which is a reference to a famous quote by video game streamer "AngryPug" in 2015 to antagonize Chinese streamer "Em0" during a match in the computer game "H1Z1." Below the slogan is Taiwan's flag followed by its national emblem, reported Taiwan News. Russia-Ukraine War Live Updates: Anonymous Hackers Replace Russian State Media News Site With Anti-War Messages.

The hacker group then stated that it is taking a "short break" from its cyberwar on Russia to "remind China to not try anything stupid against Taiwan."

It pointed out that since the Russian invasion began, it has launched numerous attacks on Russian government and state-run media websites, industrial control systems, and hundreds of surveillance cameras. Alluding to Anonymous member "Cyber Anakin's" five-day hack into Chinese computer systems, including nuclear power plant interfaces, it mentioned a "souvenir" he had left for China.

The defaced page included the flags of Tibet, Taiwan, East Turkestan, Southern Mongolia, and the Black Bauhinia flag, as well as a memorial for Li Wenliang and notable people who died from COVID, reported Taiwan News. The CCP website that was the subject of the defacement quickly went offline and as of publication, the site is still inoperable. An archived version of the defacement can be found on the Internet Archive Wayback Machine.