The world's oldest person from the southwestern Japanese city of Fukuoka died at the age of 119 on April 19, the government said on Monday. Tanaka ascribed her longevity to "eating delicious food", including soda and chocolate, as well as "learning" new things. 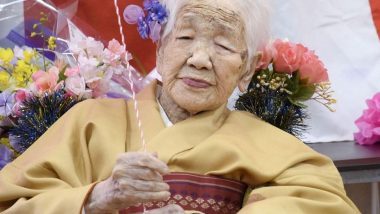 Tokyo, Apr 25: The world's oldest person from the southwestern Japanese city of Fukuoka died at the age of 119 on April 19, the government said on Monday. Kane Tanaka was born on January 2 in 1903, the year Wright Brothers -- Wilbur and Orville Wright -- made the world's first successful flight of powered aircraft, Japan's Kyodo news agency reported. Famous people born in 1903 included British novelist George Orwell, film director Yasujiro Ozu and Japanese poet Misuzu Kaneko. According to the report, Tanaka, whose life spanned several Japanese imperial eras -- Meiji, Taisho, Showa, Heisei, and Reiwa, was born just a year before the outbreak of the Russo-Japanese War in 1904. Punjab Woman Fitted with Pacemaker at Age 118 to Become Oldest Person in the World to Undergo Surgery Successfully.

She was recognised by Guinness World Records as the world's oldest person in March 2019 at the age of 116. Tanaka also became the oldest person ever on record in Japan after turning 117 years and 261 days old in September 2020. Apart from being the oldest verified Japanese person ever, Tanaka was also the second oldest verified person ever in the world. The seventh of nine siblings, Tanaka married when she was 19 and later ran a noodle shop when her husband Hideo and their eldest son went to fight in the Second Sino-Japanese War in 1937. The couple ran a rice cake store after the war. Francisca Susano, World’s Oldest Person, Dies at 124 in Philippines.

Tanaka ascribed her longevity to "eating delicious food", including soda and chocolate, as well as "learning" new things. She was also fond of calligraphy and liked to solve arithmetic problems. She spent her later years in a Fukuoka nursing home, where she enjoyed playing the board game Reversi, among other activities. With Tanaka's death, the world's oldest person now is Lucile Randon, a French woman who is 118 years and 73 days, according to the Gerontology Research Group, which tracks super-centenarians globally.