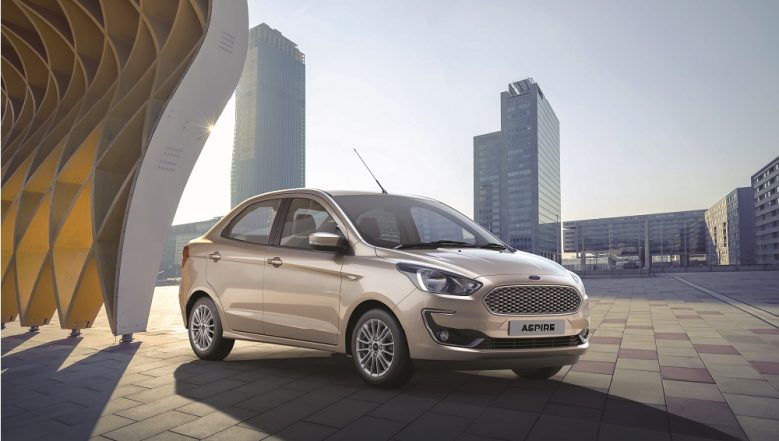 Ford India will be introducing the new Facelifted version of Aspire compact sedan in India today. Moreover, the car maker has already started bookings for the new 2018 Aspire sedan with token amount of Rs 11,000. Expected to carry major updates, the new sub-4m sedan will compete against the likes of Hyundai Xcent and Maruti Dzire. The sedan will not feature updates inside out but also mechanical upgrades. The new Honda Amaze rival will be made available in 5 trim levels - Ambiente, Trend, Trend+, Titanium and Titanium+. Ford Aspire Facelift 2018 India Launch on October 4; Bookings Officially Open Now Across India.

The company will be launching the new Aspire in India today at an event in Delhi, which is slated to commence at 12.30 PM IST. Also, the car maker will be broadcasting the event live on its official Facebook page. Watch the live streaming of the new Aspire 2018 facelift here.

Unmatched power, distinctive design and technology that keeps you miles ahead of the crowd. #WhyFollow when you can #Aspire for more.

Join us for the launch of the New Ford Aspire tomorrow: https://t.co/L00BkkceU3. pic.twitter.com/pfSWhcVYrB

The changes on the 2018 Aspire facelift compact sedan are expected to include a larger front grille finished in silver, all-new bumper with silver inserts likewise Freestyle, a revamped headlamp housing, new fog lamp cluster, new inserts in the rear bumper, new alloy wheels and much more. On the inside, the new Ford Aspire sedan will sport dual-tone black and beige interior paint scheme. It could also possibly see an inclusion of Ford's Sync3 infotainment system on the new floating touchscreen panel on the centre console. The overall appearance of the cabin is underlined by repositioned ac vents as well as piano black accents. Tata Harrier SUV aka H5X Concept Official Teaser Released Ahead of India Launch - Watch Video.

On the mechanical front, the new Ford Aspire will be powered by an all-new 1.2-litre Dragon series engine, which is also offered on Ford Freestyle. The unit is capable of making 96PS of maximum power with peak torque of120Nm. On the other hand, the diesel variant will continue to feature same 1.5-litre oil burner that can develop maximum power of 100PS along with 215Nm of peak torque. The company will also introduce the automatic iteration of the bee Aspire that will be powered 1.5-litre petrol unit making 125PS and 150Nm of power figures, however, it will be offered in Titanium trim only.