From a Dropout to an Eminent Fitness Entrepreneur, Gaurav Pawar Has Redefined Success by Introducing a Brand of His Own Named ‘It’s All About Journey’

It was in his second year of Engineering in February 2016 that he stepped into a gym for the first time ever and started working out, and he hasn't looked back since. He felt a strong desire to learn more about Fitness and Nutrition, and pursue his career in it. 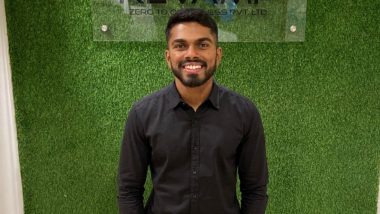 It's all about journey, the fitness-centric firm is founded by Gaurav Pawar; who was once a dropout from Engineering who made his way to becoming a successful Entrepreneur. "I always had wanted to change the lives of people, and there could be no other better tool than Fitness and Wellbeing to do that", he said.

It all started when a boy from a well off family belonging from suburbs of Aurangabad, Maharashtra tried to break the walls that he had built for himself. Like most of the scholars the time has seen, Gaurav was admitted in B.E after successfully completing his 12th grade. It was in his second year of Engineering in February 2016 that he stepped into a gym for the first time ever and started working out, and he hasn't looked back since. He felt a strong desire to learn more about Fitness and Nutrition, and pursue his career in it.

This incident urged him to make the boldest decision of his life; which was to quit the study of Engineering. He faced stiff resistance from his family for the same. His parents refused to sponsor his certification in Fitness and Nutrition; owing to which Gaurav had to start working at an early age to make savings. He soon flew the coop to his new accommodation in Pune, Maharashtra. His passion for learning never made him realize the hardship of leaving his parents. He worked at a Gym in Pune, Maharashtra for a considerable amount of time to be able to pay his course fees. Later after that, he successfully completed certification in Personal Training and Nutrition from K11 School of Fitness Sciences from June 2018 batch.

Amid all this, Gaurav had faced a lot of criticism from people who looked down upon at the Profession of Fitness and Nutrition. With the best of what he had learnt so far and a hint of his own innovation, Gaurav created the masterpiece program named Manifestation 21. It first came into the picture on 9th April 2019. It took one visionary man to start this company; and over two years, It's all about journey has seen tremendous growth in terms of revenue generated, a reputation earned, and the number of followers on various social media platforms. Business development, Social media, Sales, HR, Physical training, Nutrition, and Mindset training are few of several departments that work for his company today. Fifteen brilliant minds are contributing to the growth of this company, night and day. The company has offered employment to numerous young professionals. It surely has set an enormous example in front of people that a passionate individual can find success in any profession.

It's all about journey, has been working successfully in delivering fitness to all kinds of people, with various body types and health conditions; who belong to several age groups, by educating them about fitness and wellbeing; Workout, Nutrition, and Mindset training playing a pivotal role in this. With the revolutionary fitness programs like Manifestation 21, Post M21 and Affirmation 90, the company has changed lives of over more than three hundred people in the past two years in India and across the globe. 'One day, Fitness and Nutrition will be one of the most sought after career in India.' is the objective that makes Gaurav shove the path for other upcoming professionals.

Social responsibility is something that has been taken utmost care of by It's all about journey. The company makes donations to contribute towards saving the lives of animals (names maintained confidential). Gaurav looks forward to changing more lives in future in the best of the way he can.