Mahindra Marazzo Launched in India, Check Out Price of the 4 Variants and Other Features (Watch Video) 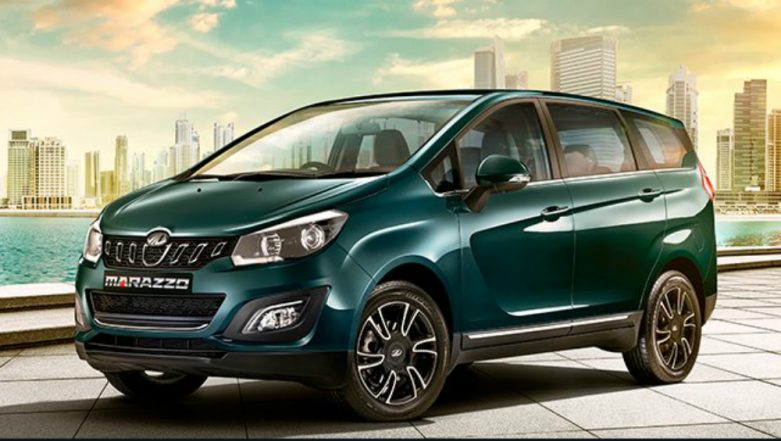 The all-new 2018 Mahindra Marazzo has been launched in India at a starting price of Rs 9.99 lakh | (Photo Credits: Marazzo@Twitter)

Mumbai, September 3: The all-new 2018 Mahindra Marazzo has been launched in India on Monday. The starting price of the car is Rs 9.99 lakh which is the ex-showroom price. The MVP is available in four variants namely M2, M4, M6, and M8. The most expensive variant is priced at Rs 13.90 lakh. The Marazzo is the all new product from the stable of Mahindra, and is the latest flagship model of the company.

Mahindra Marazzo will directly compete with the leaders of the MVP segment like Toyota Innova Crysta and Tata Hexa. The mileage of the Mahindra Marazzo is reportedly 17.6 kmpl. According to the automaker, the company has invested around $200 million in conceptualising and designing of the vehicle.

Anand Mahindra, Executive Chairman of Mahindra Group, tweeted about the launch of Marazzo and also shared the video of the unveiling of the car. Check the tweet and video below:

And here it is.. the #Marazzo reveal...Bravo to the team for conceptualising such a power packed entry.. pic.twitter.com/cDmV1O9g6u

The company officially revealed the production name of its upcoming MPV earlier this year in July. The SUV-maker has been revealing the forthcoming MPV slowly and steadily, building up for the grand event. Several Mahindra dealers across the country have already started taking pre-orders for Marazzo MPV with an upfront payment of Rs 10,000. Mahindra Marazzo India Launch on September 3; Features, Specifications & Bookings: All You Need To Know.