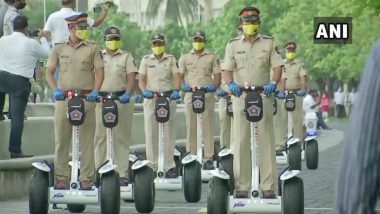 New Hampshire, June 25: Segway Inc has decided to stop production of its self-balancing two-wheeled personal transporter (PT) vehicle which was a major hit among tourists and some police forces. Launched in 2001, the vehicle promised to transform personal transport. The self-balancing vehicle has been enjoying fanfare since its debut but it struggled to make a profit.

The company said that they will end production of the self-balancing scooter in its New Hampshire facility on July 15. Segway Inc will also lay off 21 employees from the manufacturing plant. Mumbai Police Personnel Get First Batch of Self-Balancing Segway Electric Scooters For Patrolling Around Marine Drive

"Within its first decade, the Segway PT became a staple in security and law enforcement, viewed as an effective and efficient personal vehicle," Segway president Judy Cai said. However, self-balancing scooter accounted for less than 1.5 percent of the company's revenue.

Segway is a self-balancing two-wheeled scooter invented by Dean Kamen. The company has been at the centre of crashes, including former United States President George Bush falling from his Segway in 2003. In 2015, a cameraman on Segway knocked over Jamaican sprinter Usain Bolt.

(The above story first appeared on LatestLY on Jun 25, 2020 07:35 PM IST. For more news and updates on politics, world, sports, entertainment and lifestyle, log on to our website latestly.com).