Another Round: Mads Mikkelsen’s BAFTA-Winning Danish Comedy to Stream for Indian Viewers From April 12 (Read Deets)

The Mads Mikkelsen-starrer, BAFTA-winning Danish comedy drama Another Round is set to stream digitally for Indian viewers on April 23. 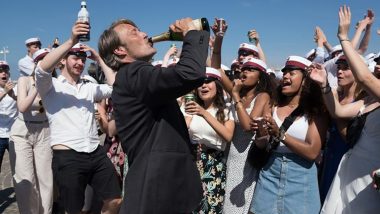 The Mads Mikkelsen-starrer, BAFTA-winning Danish comedy drama Another Round is set to stream digitally for Indian viewers on April 23. The Thomas Vinterberg directorial won in the Film Not In The English Language category at the BAFTAs recently, and is in contention at the Oscars for the Best Director and Best International Feature Film awards. BAFTA Awards 2021: Priyanka Chopra Treats Fans With Breathtaking Red Carpet Avatar as She Slays in This Gorgeous Fish-Cut Black Outfit!

The film also features Thomas Bo Larsen, Magnus Millang and Lars Ranthe, and will premiere in India on BookMyShow Stream. The White Tiger Star Adarsh Gourav Says BAFTA Nomination Is as Good as a Win for Him.

The platform has an Oscar line-up that will also showcase films like "Judas And The Black Messiah", "Sound Of Metal" and "A Shaun The Sheep Movie: Farmageddon".

(The above story first appeared on LatestLY on Apr 14, 2021 09:12 PM IST. For more news and updates on politics, world, sports, entertainment and lifestyle, log on to our website latestly.com).