Bad Boy Billionaires is a Netflix original documentary webseries which focuses on the lives of three controversial business tycoons of India, including Vijay Mallya, Nirav Modi, and Subrata Roy. The fourth episode based on Ramalinga Raju isn't available thanks to court ruling. 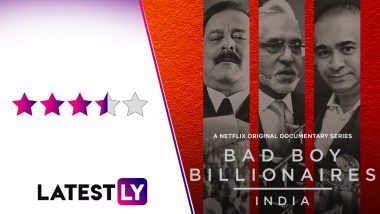 Bad Boy Billionaires Review: After battling legal cases imposed by the very same subjects it was covering, Netflix's Bad Boy Billionaires: India has begun streaming on the OTT platform. Albeit with a episode less, as the one featuring Ramalinga Raju of Satyam Computers scam is missing, perhaps still stuck in legal hassles. Instead, we have coverage on the three other 'Bad Boy Billionaires' - Vijay Mallya, Nirav Modi and Subrata Roy, as Netflix takes a trip down the memory lane showing their glamorous rise and then a shameful fall, leaving a trail of tears and curses behind. Bad Boy Billionaires Releases on Netflix but the Episode on Ramalinga Raju Goes Missing.

The format for all the three episodes of Bad Boy Billionaires: India have the same feel - we see the meteoric rise of these tycoons, how they rubbed shouldered with the rich and powerful and then how, their own crimes come to bite them in their backsides. Their stories are documented in the series through voices of people, both sympathising and criticising them. We have journalists and the social commentators giving the critical opinions on them, but there are also voices that are in supportive of them. If for Vijay Mallya, it was his son Siddharth, then for Subrata Roy, it is his senior employee, Vivek Sharma.

We see how distinct each of these tainted billionaires are from each other, even if they all came under the same public scanner in the end. Mallya was truly the 'King of Good Times' who revelled in his flamboyance. Socialite-columnist Shobhaa De is not wrong when she called him a 'flamboyant show-off', who brings the likes of Lionel Richie and Enrique Iglesias to sing at his birthdays.

Nirav Modi is believed to be the exact opposite of Mallya - even though he was the face of his own brand, he was limelight shy. Subrata Roy's megalomania and his brand of nationalism was an interesting case-study. It made me wonder if a certain State Head in India right now has been secretly taking lessons from the Sahara boss, when it comes to image-projects, insisting of keeping all under one umbrella and his ability to defend the accusations, by putting the blame on the opponents. Subrata was so obsessed about his image, that he dictates how his photos have to be taken, and we also hear how there is a huge hologram of him at Amby Valley, a city he created. Feeling any sense of deja vu? Bad Boy Billionaires: SC Rejects Netflix’s Appeal Against Bihar Order That Refutes the Use of Subrata Roy’s Name in Docu-Series.

And while they had distinct styles, the BBB had many commonalities. The documentary details into how they were visionaries in their own approach, their success came because they tread off the usual path, and basking in the social spotlight. Through archival news channel footage, we see how they built and expanded their empires through ingenious methods and creating a unique image for themselves in the eyes and minds of their consumers. In the case of Mallya and Subrata, they did it even before the PR agencies were in style in India. The archival news footage also gave us a glimpse of the controversial news anchor Arnab Goswami from his Times Now days, when he was errr... less hyper and actually questioned the right guilty parties.

The glam part of their lives is shown through their hobnobbing with Bollywood stars and cricketers. Familiar faces like Amitabh Bachchan, Shah Rukh Khan, Deepika Padukone, Preity Zinta, Lisa Haydon, Nimrat Kaur, are seen through archival footage. Of course, none of the film or cricket stars gave interviews to the Bad Boy Billionaires team, but the documentary series once again reminds you how tycoons and politicians have been using Bollywood as a means to promote themselves.

What's even more curious is how the documentary series show that their falls also have a similar pattern. As you must already be aware, the cracks surfaced when their financial discrepancies became public. If Mallya and Modi have allegedly not paid back millions of money they took as debts from nationalised banks, then Subrata was accused of money-laundering through his 'Sahara' Chit Fund scheme, where he took money from millions of poor citizens in what is seen as a pyramid scheme. These (heartbreaking) portions of the series that show how they built their Romes over the tears of under-privileged while banks and governments looked the other way, is a stark reminder that social equality is merely a myth in India.

At the same time, Bad Boy Billionaires tries to cover the scandals and the accusations from both the angles. If the investigative journalist Sharat Pradhan, who had a big hand in exposing Subrata Roy's scams, has no qualms in calling him a fraud, then former Sahara Executive Vivek Kumar uses every moment in the interview to praise him. If Mallya's former employee calls him a criminal, then his son is insisting that his father is being made a scapegoat. Though it is really hard to agree with Sid Mallya's sentiment, when in the background we can see a gold statue of Buddha, after we just heard a story of how a women committed suicide after her husband lost his job due to Kingfisher's insolvency. Or when former Sahara India Pariwar VP Rajeev Bajaj claims every investor has been paid off, we see many of the poor depositors are still waiting for their own money to be returned to them.

I was a little letdown that the political connections to the tycoons were underplayed. The Vijay Mallya episode references to PM Narendra Modi's rise to power based on anti-corruption drive, that reportedly increased pressure on the Kingfisher baron. Though we never are told how he managed to escape the country. In case of Subrata, we see politicians attending his sons' wedding, along with popular Bollywood celebs. Apart from these, the political angle isn't played around much. You could have got at least one politician to talk about them, can't you?

On a personal note, the Mallya and Subrata Roy episodes invoked a sense of nostalgia for me. As a journalist points out, every '90s kid can't forget the whole 'Ooo La La La' campaign of Kingfisher's, that was quite huge in that era and still has recall value. I used to be an intern at the Airport Centaur hotel when Sahara group took over in 2003 (that hotel is now non-operational, I believe). My batch at IHM Mumbai was hired for a week for the catering of the Sahara family wedding in 2004. Both episodes being glimpsed in the series. Weird to realise how things have changed over the years, how stars have taken for a fall.

PS - I am really eager to watch the Ramalinga Raju episode, since his is a story that is shorn of the glamour associated with the other three. And therefore, less discussed in the public profile. Hope Netflix manages to air that one too! Bad Boy Billionaires: Telangana HC Rules in Favour of Ramalinga Raju, Restrains Netflix from Releasing its Web Series on India's Controversial Tycoons.

Insightful without being too partisan, Bad Boy Billionaires covers the quixotic lives of its subjects in a very arresting manner, though it won't offer any new piece of information to you, if you have been ardent follower of their news. Bad Boy Billionaires is streaming on Netflix.

(The above story first appeared on LatestLY on Oct 05, 2020 10:56 PM IST. For more news and updates on politics, world, sports, entertainment and lifestyle, log on to our website latestly.com).