28 Years Of Damini: Did You Know Aamir Khan Did His First Item Song For The Film And Also Promoted Andaz Apna Apna With His Cameo? (Watch Video)

Aamir Khan is a perfect actor. Not just because he gets into the skin of his characters but also because he never shies away from doing anything and everything for his movie. In fact, he turned an item boy of Damini when he did a song with Meenakshi Shashadri and also spoke about Andaz Apna Apna. 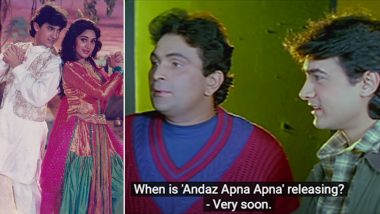 Damini completes 28 years today. It released in 1993. We remember it for its hard-hitting concept which was almost alien to mainstream cinema in that decade and also for Sunny Deol's Dhai kilo ka haath. But what many may not remember is that Damini also marked the debut of Aamir Khan as an item boy. Yup, you read right. It was the first time that the Laal Singh Chaddha actor appeared in a song. It was a cameo where he danced with Meenakshi Shashadri and even did an Andaz Apna Apna plug-in. Aamir Khan’s 3 Idiots, Mohanlal’s Drishyam, Shah Rukh Khan’s Swades – 10 Indian Movies That Actually Make It to IMDb’s Top 250 Movies (LatestLY Exclusive)

What's amazing about the song in Damini is, Aamir Khan is almost like Tiger Shroff here, sprinting from one place to another with so much grace and stealth that we are pretty sure the man must have rehearsed the song for long. It is also a grim reminder that Rishi Kapoor is gone and will never get to see him onscreen again.

As for the Andaz Apna Apna promotion, watch Damini on YouTube to know more. Aamir Khan’s Feedback Is Important as He Is ‘Brutally Honest’ with His Opinion, Says Kunal Kapoor

Aamir Khan is a sensation item boy if you ask us. Be it this song in Damini or I hate you from Delhi Belly or the one in Secret Superstar or the recently released Har Fun Maula in Koi Jaane Na, the actor is superfine.

(The above story first appeared on LatestLY on Apr 30, 2021 05:47 PM IST. For more news and updates on politics, world, sports, entertainment and lifestyle, log on to our website latestly.com).