Only two regional movies are part of this list, both of them from South and are thrillers. This gives you an idea that while your fave movies might have made it to the list, IMDB 250 might not be a very good indicator of showing the best of Indian cinema to the world. 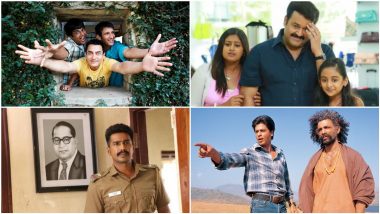 If you are a cinephile, you would be knowing that the IMDB (Internet Movie Database) has this elite list of its top rated 250 movies. This list is based on the user rating given to a movie on a scale from 1 to 10. However, not many know that there are quite a few IMDB lists that have 'highest rated movies', but IMDB specifically follows only one list, and surprisingly, it only has 10 Indian films in that! Steven Spielberg Birthday Special: From Jaws to Jurassic Park, 10 Highest-Rated Movies of the Director As per IMDB and Fascinating Trivia About Them.

You can access the list by going to IMDB's menu and then clicking on Top Rated Movies under the Movie Section. The list is an ever-changing one, as movies enter and exit based on the increase and decrease in user rating and in the number of votes. Like for example, Zack Snyder's Justice League makes its presence felt in the list, but it still remains to be seen if that continues once the euphoria over the film is down.

As of now, it is mostly Hollywood movies that dominate this list, with The Shawshank Redemption (9.2), The Godfather (9.1) and The Godfather: Part II (9.0) taking the top three spots. As per IMDB's rules, for a movie to be part of this exclusive list, it 'must receive ratings from at least 25000 users'. Another section of the site mentions that 'only votes from regular IMDb voters are considered when creating the top 250 out of the full voting database'. The site, however, refrains from revealing the criteria used for selecting a person as a regular voter. The ranking also doesn't always follow User Rating. For example, a movie with a rating of 8.4 can have a lower ranking than a film with a rating of 8.2. So it all depends on the votes that IMDB consider as legit. Not Dil Bechara, Sonchiriya Should Have Been Sushant Singh Rajput’s Highest Rated Film on IMDB – Here’s Why.

As for the Indian movies, like I mentioned before, only 10 films make their way to the list. Whether they deserve the places there or not, is another matter. Like the rule states, a lot depends on the number of votes. For example, Satyajit Ray's masterpiece Pather Panchali, which is celebrated by filmmakers worldwide, doesn't feature in the list, though it has a rating of 8.6! Reason? At 24,076 votes, Pather Panchali falls just short of IMDB's required 25000 mark.  Oscars 2020: Did You Notice Academy Awards’ Tribute to Satyajit Ray’s Pather Panchali?

Another case to observe here is that of Sholay. Considered as Bollywood's greatest film, this Ramesh Sippy classic has a ranking of 8.2, but doesn't make it to the list because another Hindi film closes this list with the same rating but more votes, read ahead to find out which movie. You would also notice that offbeat cinema and films with women-oriented premises also wouldn't have made the cut.

As for the films that made it to IMDB's Top 250, Aamir Khan can perhaps thank his Chinese fanbase, as not one but four movies of his make it here. And yet, Lagaan -  his Oscar-nominated film - doesn't make a cut, as its rating of 8.1 wasn't enough.

Shah Rukh Khan also has a movie here, which can be attributed how much NRI's loved that movie. Sadly, only two regional movies are part of this list, both of them from South and are thrillers. This gives you an idea that while your fave movies might have made it to the list, IMDB 250 might not be a very good indicator of showing the best of Indian cinema to the world. Ashutosh Gowariker Birthday Special: 11 Standout Scenes From Lagaan and Swades Director’s Remarkable Filmography – Watch Videos.

Anyway, without further ado, let's look at 10 Indian films who made it to the real IMDB 250 list, their ranking and their votes (seen below the rating). 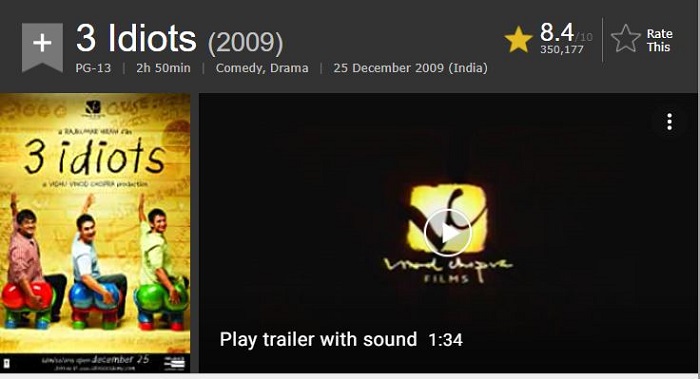 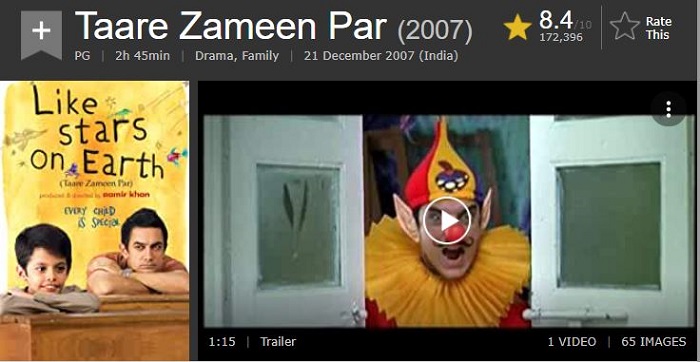 Marking the directorial debut of Aamir Khan, the movie stars him along with Darsheel Safary. Taare Zameen Par is about how a teacher helps a dyslexic student come out of his shell and get more confidence in life. 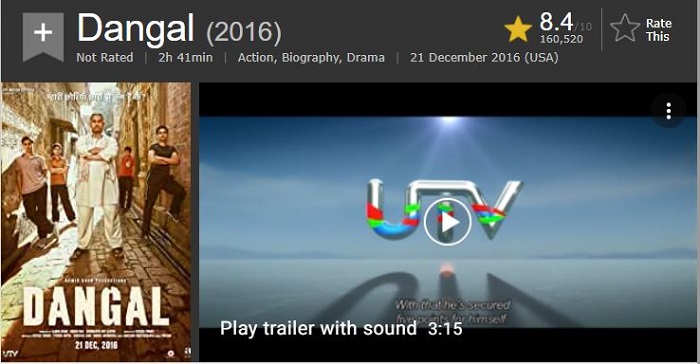 The highest grossing Bollywood movie of all time, Dangal is directed by Nitesh Tiwari and is a biopic on the Phogats. Aamir Khan plays the lead, while Sakshi Tanwar, Fatima Sana Shaikh, Sanya Malhotra and Zaira Wasim are also in the cast. 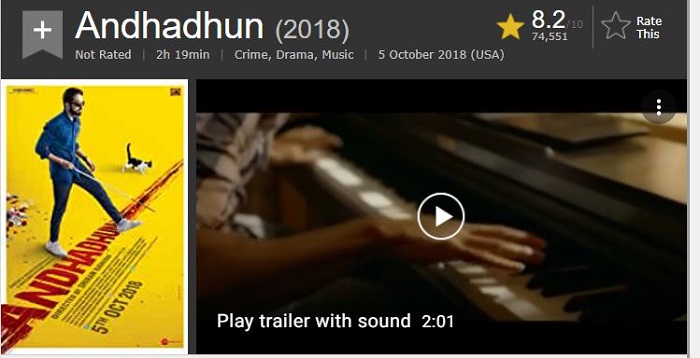 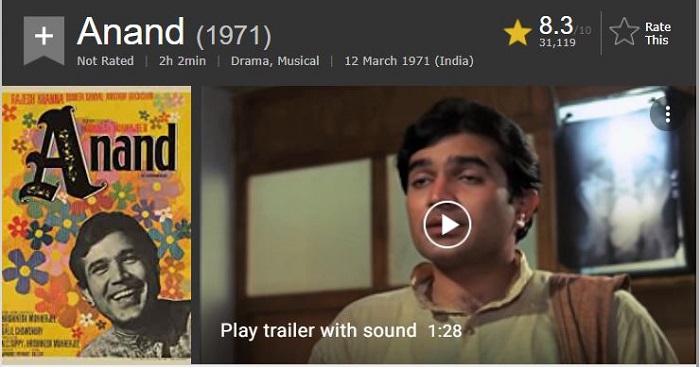 This Hrishikesh Mukherjee classic has the late Rajesh Khanna in the titular role of a happy-go-lucky patient who isn't intimidated by his impending death. A pre-stardom Amitabh Bachchan makes his mark as his doctor and later, best friend. 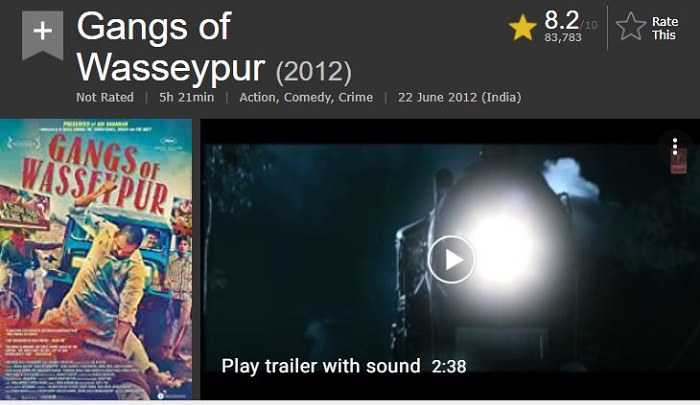 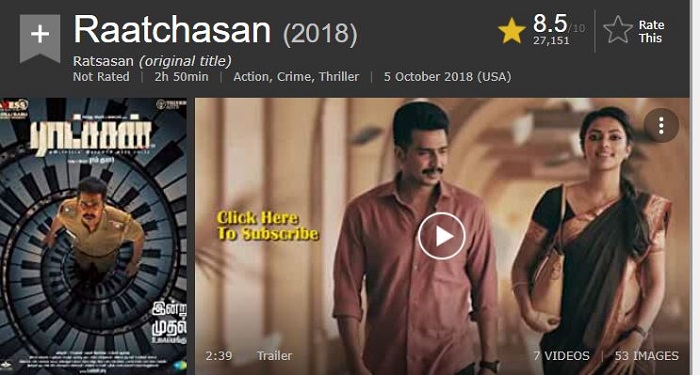 This Tamil serial-killer thriller is directed by Ram Kumar. A cult hit at the box office, the movie stars Vishnu Vishal and Amala Paul in the lead roles. 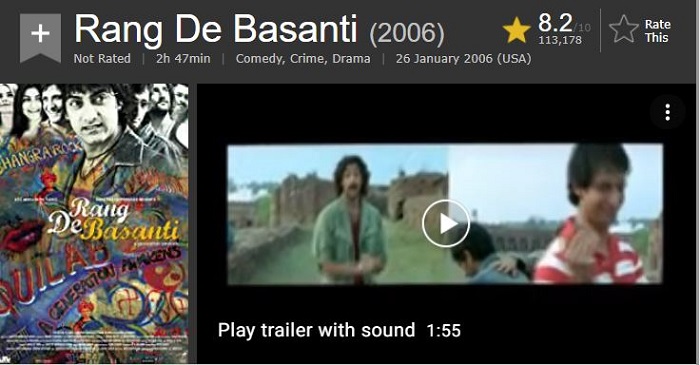 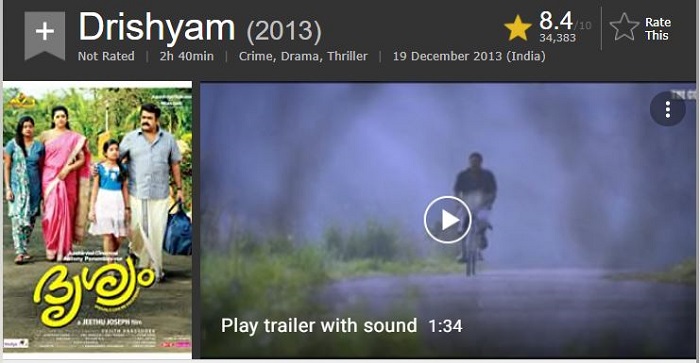 One of Malayalam cinema's biggest blockbuster, this thriller is directed by Jeethu Joseph and has Mohanlal in the lead. The movie recently had a sequel, that also won over the fans and the critics with its twisty narrative. Drishyam 2 Movie Review: Mohanlal’s Sequel to His Blockbuster Family Thriller Is Loaded With Pulpy Surprises. 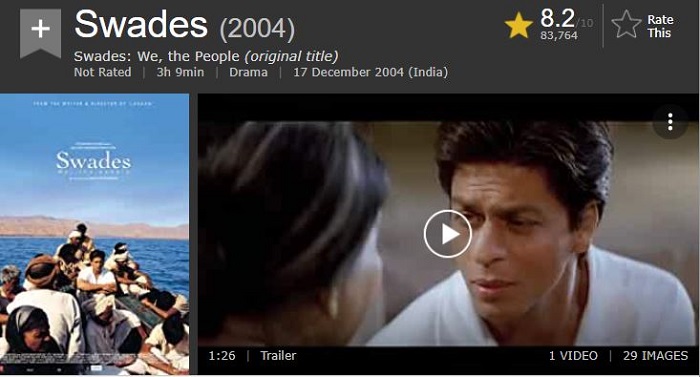 While Lagaan might have not made it to the list, Ashutosh Gowariker's social drama closes the list at the 250 spot. Starring Shah Rukh Khan in one of his best roles, Swades was a flop at the box office, but has gone on to enjoy a huge fan following over the years.

So did the Indian film that impressed you the most make it to this list? Share your thoughts and views in the comments section below.

(The above story first appeared on LatestLY on Apr 15, 2021 06:16 PM IST. For more news and updates on politics, world, sports, entertainment and lifestyle, log on to our website latestly.com).