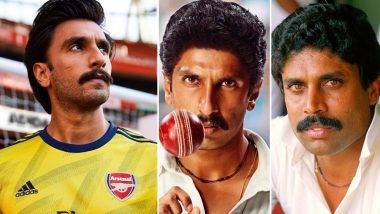 On July 6 the nation rejoiced for two reasons – it was Ranveer Singh’s birthday and on the same day his look as Kapil Dev in 83 The Film was unveiled. From fans to celebs to cricketers, everyone were might impressed with Ranveer’s look as the Haryana Hurricane. Ranveer has never shied away from experimenting with his roles. This time the multi-talented star had to achieve a lean frame to get the look of the then-skipper Kapil Dev in the ’80s. Happy Birthday Ranveer Singh! Twitterati Bowled Over with Actor’s Look as Kapil Dev in 83 The Film – Read Tweets.

Anmol Singhal has been working on Ranveer Singh’s diet to help him get that lean frame for 83 The Film. Co-founder of PoD Supply, Ranveer has been Anmol’s client for more than five years and he is well-versed with the actor’s taste-buds. Keeping in mind Ranveer’s favourite cuisine, Anmol Singhal has made a special diet. In an interview to Mid-Day.com he was quoted saying, “Ranveer loves Indian cuisine. So, we try and bring as much variety into his food while keeping the restrictions in mind. For the past few months, Ranveer has been put on a protein-heavy diet. His favourite is the jalapeño and crisp bacon omelette that comprises rolled oats, eggs, topped with mixed nuts and fresh berries. The complex carbs [boost his] energy while the proteins help him cut the fat and increase muscle mass.” 83 The Film: Ranveer Singh Spotted With Kapil Dev at Mumbai Airport; Actor Opts for a Simple and Not Quirky Avatar – See Pics.

Ranveer Singh as Kapil Dev in 83 The Film

83 The Film, touted as one of the biggest sports drama in Bollywood, is directed by Kabir Khan. This upcoming flick also features Deepika Padukone as Romi Bhatia. Not just that, she would also be co-producing the film. All eyes are on this film and of course Ranveer Singh’s performance as Kapil Dev. ’83 is all set to hit the silver screens in April 2020!

(The above story first appeared on LatestLY on Jul 18, 2019 09:05 AM IST. For more news and updates on politics, world, sports, entertainment and lifestyle, log on to our website latestly.com).