Alaya F on Her Mother Pooja Bedi: She Is an Extremely Positive Person

Alaya F's mom, actress Pooja Bedi, has never really minced words when it comes to sharing her thoughts. Meanwhile, Alaya F, who was seen in her film Jawaani Jaaneman, recently starred in a music video called Aaj sajeya. The song has been written, composed and sung by Goldie Sohel. 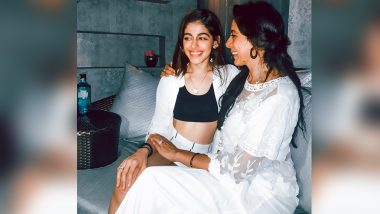 "The one wonderful thing is that she is an extremely positive person. She focusses on telling me the positives. If I ask about it, she will tell me anything I want to know. Most of the conversations related to the the industry have been positive," Alaya told IANS. She adds that her mother never planned to be an actress. Alaya F Reveals the Golden Life Lesson From Mom Pooja Bedi: If You Get Married Before You’re 30 You’re Doing the Stupidest Thing.

"My mother never intended to be an actor. It was never her big dream to be an actor. She kind of fell into it. I don't think there were many heartbreaks with the industry when it came to her," she says. Meanwhile, the actress, who was seen in her film Jawaani Jaaneman, recently starred in a music video called Aaj sajeya. The song has been written, composed and sung by Goldie Sohel.

"My film released and the world went into lockdown, so I lost a year at the start of my career. Which is okay! I knew that I wasn't going to have a release coming out super soon. When Punit (Malhotra) came to me, I saw no reason not to do it. I mean Manish Malhotra was doing my clothes and Micky (Contractor) sir was going to do my make up and he (Puneet) was directing it. Everyone else involved was just so wonderful, I was like let's totally do it!" she says.

Alaya dons the look of a young bride in the music video. "The concept is fun, young, new, modern bride. It is funny because when I go to a wedding, instead of heels, I wear boots or high sneakers as they are more comfortable. I related to it on a personal level. I loved the whole vibe of it. It was something which my character from Jawaani Jaaneman never got. In the film, I got pregnant, but never married. So here I got to get married!" she says.

(The above story first appeared on LatestLY on Apr 08, 2021 12:21 PM IST. For more news and updates on politics, world, sports, entertainment and lifestyle, log on to our website latestly.com).