Amar Singh Passes Away: Amitabh Bachchan Pays Condolences to His Former Friend With a Tweet That Says Nothing but Tells Everything

Rajya Sabha member and former Samajwadi Party leader Amar Singh died on August 1, 2020. He was 64. Singh, once upon a time, was a close friend of the Bachchan family. 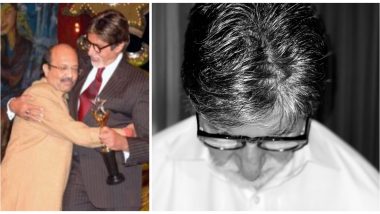 Rajya Sabha member and former Samajwadi Party leader Amar Singh died on August 1, 2020. He was 64. Amar's health was not good for a long time. As per reports, he was undergoing treatment in Singapore for the past few months. Reports also suggest that Amar was in the ICU and his family was by his side. Amar had suffered kidney failure in 2013.

Singh, once upon a time, was a close friend of the Bachchan family. He was regularly spotted by the paparazzi with the Amitabh Bachchan at various events. They had a fallout a few years ago. But things seemed to be getting better between the two. In February, Amitabh had texted Amar paying his condolence on Amar's father's death anniversary. Amar had tweeted, "At this stage of life when I am fighting a battle of life & death I regret for my over reaction against Amit ji & family. God bless them all."

Amitabh took to his Twitter handle to share what looks like condolence to the departed soul. Big B did not post any words. But only a black and white picture, where he has bowed down his head.

Currently, Amitabh Bachchan is at the Nanavati Hospital in Mumbai. He was tested positive for COVID-19 in July, along with his son Abhishek, daughter-in-law Aishwarya, and granddaughter, Aaradhya. Aaradhya and Aishwarya have recovered from the disease. Amitabh continues to be treated for it in the hospital with son.

(The above story first appeared on LatestLY on Aug 01, 2020 07:29 PM IST. For more news and updates on politics, world, sports, entertainment and lifestyle, log on to our website latestly.com).